Dream On: Rocking It Out with Aerosmith

One of the great things about hosting Resolume workshops is you get to meet so many amazing people from all over the world.

One such amazing person is Danny Purdue.

After joining us for a session last year, he showed us the impressive work he was doing for Light Nightclub in Las Vegas. Soon after that, we got word he would be running Resolume for the visuals on the Aerosmith world tour. Live visuals are common in EDM and club scenes, but still a relatively new thing on rock shows, so of course we had to get the lowdown on this.

Here's the interview with Danny himself. 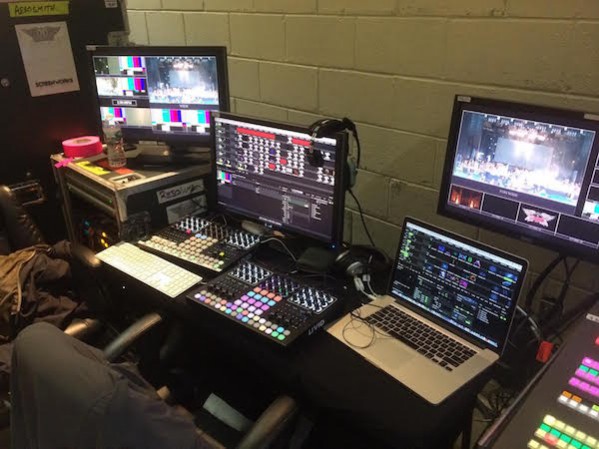  Who are you and how the heck did you land a job with Aerosmith? What other work have you done?

I’ve spent most of the last ten years touring and producing live video at concerts. I started out running camera and editing, then eventually got into directing and more of the overall show design. On the side I had an interest in VJing, and the two paths crossed when I directed the live video for Swedish House Mafia's “One Last Tour” in 2012. The camera shots needed to be stylized to complement the LED visuals, so I integrated Resolume with a broadcast switcher to mix effects with my line cut. Creatively it was really fun and being out there inspired me to pursue VJing more seriously.

When that tour was over I headed to Las Vegas for a residency at two clubs opening in Mandalay Bay. One was Daylight Beach Club, a straightforward VJ gig, and the other was Cirque du Soleil’s Light Nightclub, an ambitious project to combine the theatrics of Cirque with EDM and the nightclub environment. Light has a massive LED installation, wireless HD cameras, motion tracking equipment for generative visuals, and custom content built for the architecture of the room. It took a lot of talented people to bring all the pieces together and make Light successful.

In March I got a call about putting together a Resolume demo for the upcoming Aerosmith tour. It sounded like a cool opportunity, so I went over to LA and worked out a formula similar to the Swedish House rig with Arena running inline with broadcast video equipment. A few days later Steven Tyler came by, I demoed some looks, then we spent a couple hours trying out all kinds of effects using recordings from previous shows. He liked what he saw and asked me to join the tour.

Why was Resolume chosen over other media servers?

The choice to use Resolume came from Steven. I was pretty surprised he knew about it, and even more so when we first met that he had actually downloaded the demo, gone through footage on the website, and rattled off names of the animators he liked. The man does his homework. After seeing what VJs were doing with Resolume, Steven was excited to use the large palette of effects to create visual moments in Aerosmith's show.

We didn’t    have production rehearsals before the tour, so the immediate benefit of Resolume was rapidly developing ideas. Instead a lengthy creative process with renderings and reviewals, we knew a server running Arena could achieve whatever visual treatments we came up with on the road.

How is operating a rock show different from an EDM style event?

The main difference on this project was using visuals and effects to accent a show rather than drive it. What fans want to see at an Aerosmith concert isn’t graphics, it’s these rock icons playing their instruments and Steven Tyler’s wild stage presence. So it was a video-first approach where several elements had to be right for a visual moment to be effective.

After Steven and I developed a concept, I worked with our lighting designer Cosmo Wilson, video director Jeff Claire, and the camera crew to sort out the practical side of things like colors, spotlights, and filming angles. It was a much different environment than VJing at a rave where your content is the show and you’re more in control of the ambience.

How was your deck structured?

I ended up using a single deck mostly because it simplified my workflow with live inputs. Rather than having a lot of device source clips, I stuck with two and used layer routers to get signal wherever I needed it in the
composition. For one of the keying effects this routing allowed me to send an upper layer back down in the render order, which is a feature that’s hard to appreciate until you need it.

The deck was mostly effect clips and a small selection of content. Out of seven layers total, two were essentially fixed tools and the other five gave me plenty of room to stack up each look in a single column. One feature of Resolume I had rarely used for VJing but came to rely on for this project was Composition MIDI mapping. It saved a lot of time by not having to remap as I shuffled things around and tried different orders of effects.

What effects did you use to create the different looks for the songs?

Each look was a combination of multiple effects with the most significant parameters linked to dashboard controls. Here are a few of my  favorites.

One of the first looks we created was for “Eat the Rich,” which started with an upbeat, tribal-esque breakdown of percussion and vocals. Steven walked downstage, faced the camera, and did some crazy dance moves with an effect we called "Shiva.” It was based on Delay RGB with some color strobing, and I had a couple knobs controlling distortion effects based on his moves that particular night. 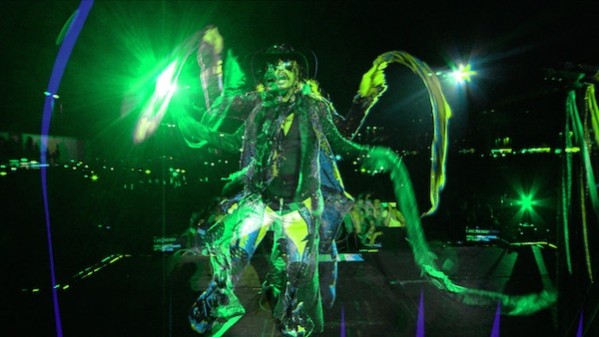 The trick with this Edge Detection effect was keeping detail on Steven so it didn’t look gaudy, then I added the glare to give it a more elegant feel. This one really popped during “Dream On” when Steven stood on top of the piano with his hair and clothes blowing in the wind from the stage fans. The song opened with a clip of rolling clouds and those fit nicely with this look too. 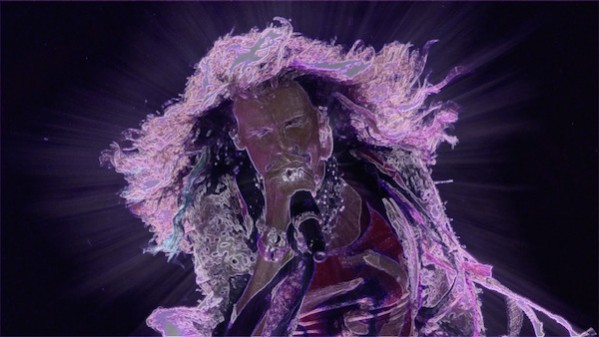  
  The most challenging cue each show was called “Face Melt,” where a combination of keying effects made Steven's skin translucent to reveal twisting (Cosmic Strings!) graphics. Most of the time we used this at the beginning of "Sweet Emotion” under moody ultraviolet light, which is incredibly tough to key against. I had presets that got it close and dialed in the rest by hand to make sure content only played over him and didn't spill out over the rest of the image. This look was part of my original Resolume demo for Steven. 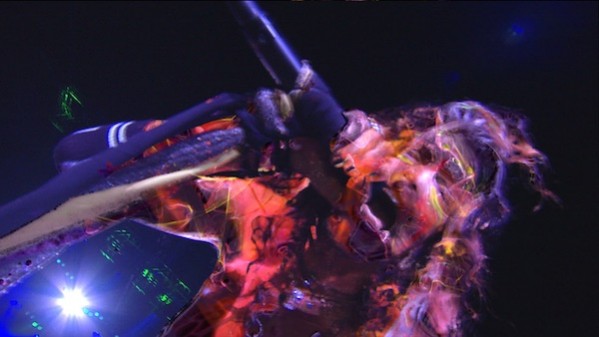  
 What were the technical setup and signal flow like?

As VJs we’re often confined to prosumer gear that fits in a carry-on case. Not here. My equipment and the main video system were provided by Screenworks NEP out of LA, giving me access to considerable resources at the beginning of the project. During the system build I was able to pull broadcast-grade hardware and converters off the shelf, test them out, and get exactly what I needed. Having a lab of sorts to experiment with integration was a real luxury. Once the spec was complete, our tech-saavy video engineer went through each piece of gear from camera to screen and shaved off every millisecond of latency possible.

My rig was located backstage with the rest of video world since I needed access to several HD sources and quick communication with the video crew. Resolume ran on a 2013 Mac Pro and captured two discrete video signals using a Blackmagic DeckLink Duo. The card took any combination of cameras and switcher feeds based on my selection with remote panels connected to the main system router. Resolume’s output passed through an Image Pro for genlock and HD-SDI conversion, then went back to the central router so we could place it upstream or downstream of anything else in the signal flow to the LED screen.

For control I used Livid Instruments’ CNTRL:R. It has both regular and “endless" knobs, small drum pads, plenty of RGB buttons, long-throw faders, and a layout that works well with how I operate. Everyone of course has their own cup of tea when it comes to MIDI controllers, but when Resolume is open I almost always have the CNTRL:R plugged in too.

The heart of the video system was a Ross Vision, a high end broadcast switcher with all kinds of mixing, keying, and automation abilities. We had one look driven by the Vision that was a grid of nine different 1080 HD sources with no drop in frame-rate or performance. For another song we had switcher buttons triggering sequences of comic book styled playback based on which band member and camera angle were being shown, then a layer of effected live video from Resolume was keyed into a panel to match the look. Top-notch hardware opens the door to some pretty imaginative workflows.

 
  Where do you see Resolume fitting in to a crowded scene of media servers and VJ software?

What originally got me into Resolume is its simplicity and intuitiveness, which let me focus on being creative. This is particularly important when you’re working with a high profile artist whose time is very valuable. In a creative session you have to quickly translate ideas into a repeatable cues, so you need a fast and flexible workflow. There is always time to go back and get technical with optimizing effect stacks, layering, and MIDI mapping. What doesn’t work is a rock star tapping his foot waiting on you to configure something.

One of Resolume’s best advantages that seems to either be overlooked or taken for granted is that it’s cross-platform. It’s important to me that no matter what tools and hardware I want to use, I don’t have to worry about changing the main piece of software I use to operate a show. Especially with Syphon and now Spout, a lot just comes down to user preference and project needs.

Looking forward, I’m excited to see how Resolume tackles new trends like it did with projection mapping. Things like timeline-based control data and DMX output are readily available using third party apps, but the process could be simpler.

Resolume is still a new tool to the industry as a whole and has a lot of room to grow beyond the EDM scene. As more artists embrace interactive technologies, generative show elements, and live content operators, having a powerful creative hub that can adapt to different  workflows is key. Before this project I wouldn’t have expected Aerosmith to be part of this conversation, and was pleasantly surprised that even rock legends are riding the new wave of visual art.

See more of Danny's work at http://programfeed.com/ Posted by Joris on Thursday December 11, 2014 at 12:31 Tags: Aerosmith * behind the scenes * touring
Comment from drazkers:


Happy you guys did this interview, Danny is a boss and has been killing it. Great stuff.


This is absolutely incredible! Great interview... dream on!


Thanks guys! I have a little more to share with you.

Tom Hamilton, the bassist, had a custom guitar made with a video screen. So naturally we wanted to try piping Resolume through it... and wirelessly of course! The final spec was an onboard system that was easier for his tech Aidan to maintain, but we had our fun.

This baby came out for "Sweet Emotion" to rock that ever so sweet bass line. Here's a short clip of the setup.