A breath of fresh air in the saturated landscape of abstract EDM visuals, Ghostdad aka Ryan Sciaino caught our eye running the impressive visuals for Porter Robinson's Worlds tour. After spending a morning scouring the Interwebs for concert footage, we figured we just might as well get in touch with the legend himself. 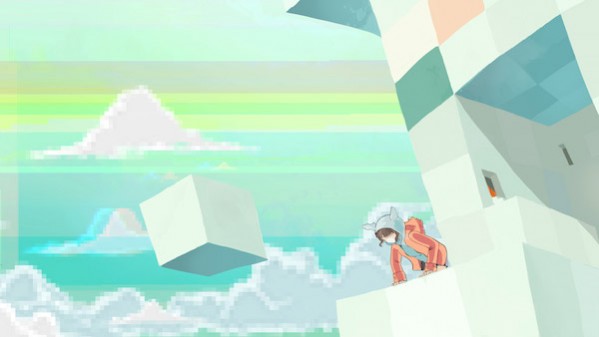 How did you get started in the VJ game? When did you discover Resolume?

I grew up playing music, and eventually DJing, and then creating visuals for my own music. At some point digging for records and samples turned into digging for found footage from VHS tapes and dollar store DVD's. That was around the time internet video was becoming popular too so I’d comb youtube and archive.org for weird stuff also.

I went to college for computer music and started learning max/msp while I was there. I built a video sampler I could use to switch through clips while DJing, but eventually amped it up to take it on the road with my band WIN WIN when we were doing a synched up DJ/VJ set. It was sort of a monster with cue points and BPM synch and effects so programming it got pretty intense!

When I started working with Porter I knew I needed something faster and easier to throw new content into on the fly. I was making lots of new looks to layer up with other clips and logos etc. It seemed like Resolume could handle anything I threw at it, and the triggering was the fastest I’d ever used, making it really fun to jam with.

Who are some of the artists that inspired you early on? Who is knocking your head back currently?

I listened to a lot of indie rock in high school and Cornelius was one of my favourite artists from Japan. I was lucky enough to see him do his Point show in NYC. I had never seen anything like it. I grew up watching music videos and even got into film and video art so I was used to seeing music and video together but never with live music in person like that. The content and degree of synch were incredible. It really blew my mind.

I’m a pretty big fan boy of artists who use multimedia in a conceptual way but also keep it really clean design wise like Ryoji Ikeda or Rafael Rozendaal. I’ve found more and more of my Vimeo likes being taken up by things that have been featured at http://ghosting.tv. And I definitely try to check out other artists when I’m at festivals too. I saw Bassnectar at Buku in New Orleans a few weeks ago and that was an awesome show.

You have a very varied but distinct style. From anime characters to mayan mysticism to abstract glitch to low-poly geometry to ponies, the list goes on and on. Where does it all come from? Didn't your mom tell you not to spend so much time on the internet?

No actually! We didn’t have the internet when I was growing up! We got a connection by the time I was in high school but it was maybe dial up speed at best. I’m a little older then what I consider to be the first real “internet generation” so when things got really high speed and dazzling it made me feel like a stranger in a strange land. There was so much amazing stuff happening on Tumblr or Vimeo or Second Life that I just wanted to check it all out. I get sucked down the rabbit hole online pretty easily, especially when I want to find out more about a genre or an artists or a meme. Some design trends I see online do remind me of things I grew up with like 8 bit video games or low poly 3D graphics so maybe that makes me think “I can do that!” 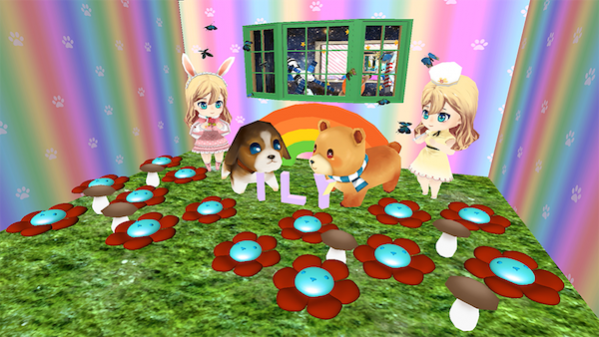 What caught my eye about the Porter Robinson 'Worlds' content is that it almost seems to be cinematic, in that it seems to be telling a story. Now our minds will always create a narrative with what we see, but is this an experience you consciously set out to create?

I think Porter’s goal is to invoke a feeling rather then tell a specific story. There’s definitely a tendency to connect what you’re seeing on the screen and create a story in your mind but that’s also the process that pulls you in and allows you to really feel it. In programming the show we give you every audio/video/lighting cue we can for the theme and timing and mood, and as a result I think the viewer gets to paint their own story and put themselves into it in the process. 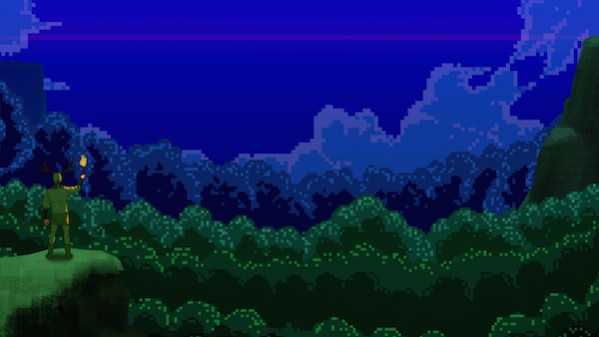 We worked with Invisible Light Network on the animated looks you see in the show. They’re based in NY also and had about 9 or 10 illustrators and animators working on their team. We were also able to grab additional content from some of Porter’s music videos like Flicker by Coyote Post.

I made content for the show as well and Porter was super in touch with everyone throughout the creation process. It was a lot of different footage to wrangle in Premiere, but I spent a week with Porter before the start of the Worlds tour where we really figured out the visual flow and style of the show while putting it all together. Porter has a tremendous amount of vision when it comes to his music which is totally inspiring.

So when looking at Youtube videos from your shows, I came across this: https://www.youtube.com/watch?v=AdotsHAzfVA. It looks like someone has been re-creating the content he saw at the show. How do you like them apples?

Yah we just saw that also! I think fans are dying to take home a piece of the show and it’s really cool they’d go so far as to recreate it from the bits of media that are floating around out there. I think that excitement starts with Porter’s music though since there are practically whole new versions of songs from the album in the live set.

Someone even put the entire set together from cell phone footage taken at shows with homemade recreations of the live music. Okay and here’s where it gets really crazy, someone even started building the live rig into a 3D game engine: https://youtu.be/kq3TcMxpcV4

The expanded presentation of Worlds as an album is what makes it special, but I think the live and communal aspects are still super important. Maybe someday we’ll all be able to log into an MMO and experience something similar but even that won’t be able to beat being there in person experiencing the show with other fans. My guess is there will be a complete version of the Worlds show you can watch at home someday but for now we try to keep certain things exclusive to the live set so you have to show up and get the full experience.


phpBB [video]
Hopefully this crowd video from the Youtubes captures some of that live experience!

Render time is never fun and playing video games is always fun right? I’ve never been very patient with 3D software. A lot of the 3D stuff I work on has a lo-fi video game aesthetic as well so its sort of a no brainer to start throwing stuff into Unity. I jump in and out of Blender as well but I figured if I’m going to put my time into learning a 3D environment I wanted it to be real time. 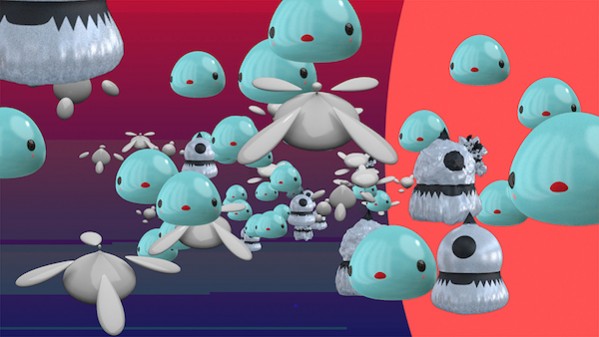 Alex my band mate in WIN WIN is way more under hood with Blender and rendered some really weird stuff for our last music video. We really liked the effect of video footage height mapped to a mesh and the objects came out really smooth and organic looking, in part thanks to some render time:

What are the main stumbling blocks you run into when working in realtime as opposed to keyframe everything? What about the liberating moments of the freedom it offers?

Scripting is something I wrestle with. It’s great that objects can do what you want in real time but you still have to tell them what to do! The benefit of course being you can see those changes instantly, and tweak it endlessly.

Controlling things in real time keeps me a little more engaged and expressive. I think coming from a music background makes that important to me. 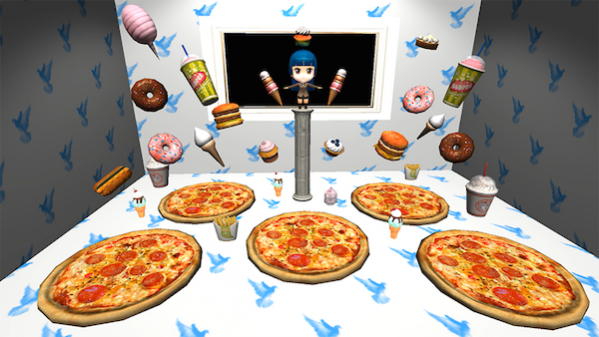 Do you like to control things in realtime during show? Or is the appeal more during the creative process?

It’s been great to get a chance to do both this year. Both VJing live but also spending time editing and programming a show I mean. There are always things that will look better when edited ahead of time, but even in a show like Worlds I leave myself a few things to do by hand. Sometimes that’s so I can follow what Porter’s doing live, but also for me to feel more involved in the performative aspect of the show. I still play guitar and keys so I don’t want to let go of that live aspect of playing visuals also like an instrument.

People seem to get really excited when discussing realtime vs rendered, some people even get militant about it. You seem to switch seamlessly between both. Do you think one or the other has more potential? Are they mutually exclusive? Where would you like to see visuals heading in the next five years?

Part of my thinking about learning realtime is definitely about the future. Ideally real time processing will catch up to how good it can look when rendering. I don’t mind it looking a little rough around the edges for now if I can play it to the beat.

Ryan is a prolific internet user, so you can catch him in a variety of digital media. Get started down the rabbit hole at his website: http://www.djghostdad.com/ Posted by Joris on Tuesday May 12, 2015 at 11:45 Tags: ghostdad * porter robinson * realtime * touring * unity Login to the forum to comment.