The Viaje Tour Ricardo Arjona has been called the most successful latin tour in 2014-2015 by Pollstar and Billboard, with an attendance of more than 1.7 million people.

The man behind the visuals on this tour is Camilo Mejia, also known as VJ Bastard. Read more about what he has to say on the touring experience below.


We have been touring for a year using Resolume with no issues. We've been to Argentina (8 cities, 25 shows and we're going back for at least 5 shows more in November), Mexico (16 cities, 35 shows), Uruguay, Paraguay, Panama, Costa rica (2 shows), Chile (7 shows), Puerto Rico (5 shows), USA (13 cities, and we're going back next month to 8 cities), Ecuador (3 cities), Venezuela (5 cities), Guatemala (2 shows, 3 cities), El Salvador, Honduras (2 cities), Nicaragua, Colombia (5 cities) and we are waiting for the confirmation of the Europe tour. 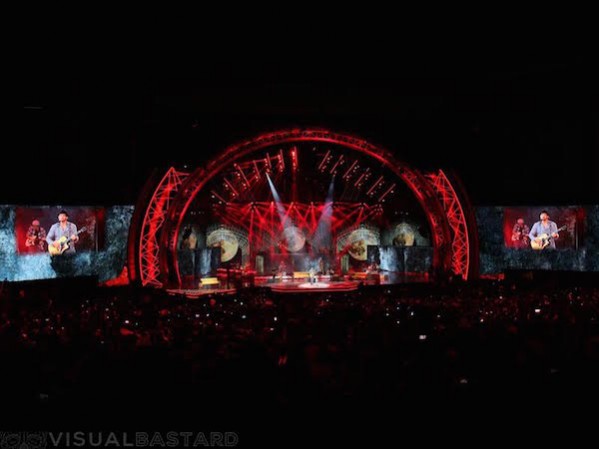 I have been using Resolume since 2.4.1, and have a good 15 years of experience playing with video.

I was called for this tour in May of 2014 as visualist and video engineer. We made rehearsals for a month in Mexico, during which we decided that the perfect system for our tour would be Resolume Arena.

First of all is the stability. I've played HUGE clips from 2gb to 70 or 80 gb, with no issues, so I know i will not have any problem with that. Because we don't run with a backup signal, that's a serious point.

Second of all we have a lot to stuff in our tour. Props (cars, trains, bikes, chairs…), back line, consoles, screens, and everything is travelling with us. As you may notice the screens of the tour are huge, and it is the first thing that we prepare for the show. Build up time is around 4 hours for the screens alone. With other systems it's easy for things to go missing, so the portability is really important for us.

The set up for the show that we use for the tour consists 436 modules of 6mm pitch LED screens. Resolume runs on a MacPro 12core 2,7Ghz /dual gpu with 64GbRam DDR3 with 1TB of storage, and 2 GPU Fire Pro d700 AMD of 6gm of VRAM.

The outputs are set up 1 for the main screen, 1 for the “leeds” or totems by the sides, 1 for the backing for the musicians (moving door), and 1 for the tunnels. The full comp is made for 2115 px X 1080 px, with no scalers, Folsoms or anything, I go straight to the processors with dual links and that's it. 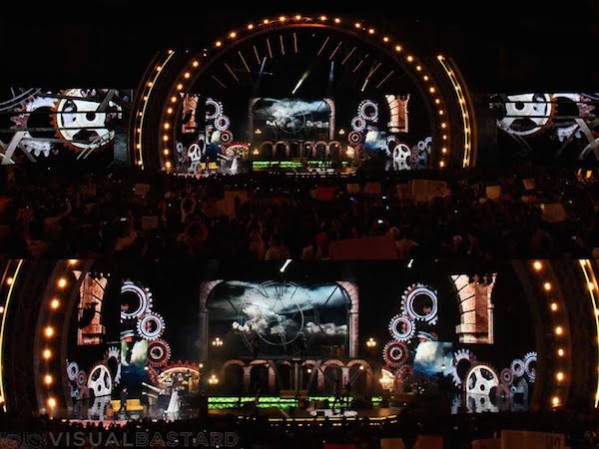 I play the show with an Akai APC40 (older version) and some of the songs had SMPTE sync sent from Pro Tools. A Blackmagic capture card is used to capture an HD-SDI signal that is used in some cues to show the musicians and other live shots.

Read more about Camilo at his website: http://www.vjbastard.com or check out his work on Vimeo at https://vimeo.com/visualbastard Posted by Joris on Monday August 31, 2015 at 14:19 Tags: Behind the scenes * Ricardo Arjona * rock * SMPTE * touring Login to the forum to comment.