When we released Arena 5 with the added options for DMX output, we were expecting you guys to do amazing things with it. Still, Spencer Heron from Rebel Overlay recently sent us a video that exceeded our expectations and then some.

Their setup has video, lights and laser, all controlled by a single instance of Arena. Combined with Rebel Overlay's trademark minimal design, it looks downright amazing.

Read more about Rebel Overlay and how they made this happen below.

Who and what is Rebel Overlay and where can we find you online?

How did you start VJ'ing?

Rebel Overlay started back in around 2005 while I was studying Film Production at the Bournemouth Screen Academy, UK. I needed more of a creative outlet for my ideas and video experimentations. Back then the VJ scene in the UK was building up some momentum, and the emphasis on experimenting with visualizing audio was a popular medium I had a lot of interest in. My first real love of visuals came when I would be glued to the television at 3am on the weekends watching a TV series on terrestrial television produced by Addictive TV, titled ‘Mixmasters’. It was a late night music show that featured audio-visual and DJ:VJ mixes produced by hundreds of different music labels and visual artists worldwide.

I wasn’t able to translate the audio and visual relationship too much in to my studies, and so I formed good relationships with event programmers and began doing projection and television displays at my friends events. Since then I moved to the city and the demand for visuals was enough that I could continue to grow the company and we’ve been working in the field ever since. 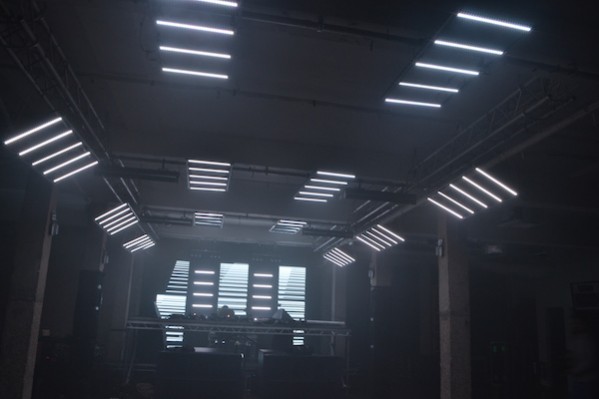 Can you tell us a bit more about your setup at Hydra?

In the video we’re using 70x RGB pixel battens, a 12mm LED screen, 24x green point lasers and 4x RGB sweeper beam moving head lights. Everything runs from inside the new Resolume Arena 5 software. We’re running the LED screen straight on DVI, while all the other fixtures are controlled using a Showjockey 16way Art-Net to DMX box on 16 lumiverses.

We create animation sequences, for e.g simple flashing boxes, and they are used to control the lighting fixtures. DMX works in values of 0 – 255. So, to translate that in to video, black is 0 and full brightness is 255, and that’s how we work with the ranges of each lighting fixture. The moving heads sweep beam lights only have one axis but split in to two sections per light, which is fairly simple to control in theory but was quite difficult to find a working solution without using more layers. For this, we used a gradient source so we have control of the brightness on 2 sides of a solid layer. We mapped the DMX value for the lights tilting to either side of this gradient, which meant we can use Resolume’s automation controls to sync in the movement, or map the movement to a fader on our midi controllers.

The lasers work on a matrix that any value over 250 switches them on, and the pixel battens act like a low resolution video screen so we can extend the content from the LED screen out over the heads of the audience. 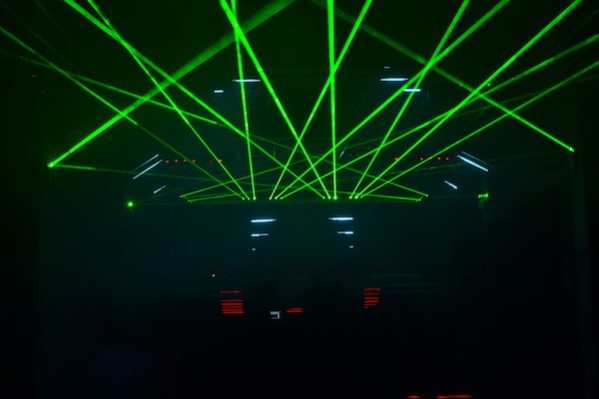 What's Hydra? Does the name have any significance?

The Hydra is an expertly curated series of parties in London, running primarily throughout autumn each year. Created in 2012 from the brainchild of former head of programming at The End Club, Ajay Jayaram, and off-location event pioneer Dolan Bergin, The Hydra has built up an inimitable reputation in the UK and further afield. Hence the name from Greek Mythology, meaning a “beast with many heads”. The Hydra also rears its head at other events across the year in London and overseas.

The Hydra’s uncompromising mission is to collaborate with the finest artists, record labels and collectives from around the world, representing them against a backdrop of superlative sound and production and bringing the very best underground music to London’s doorstep.

How does Resolume fit into all this?

I began using Resolume software around the launch of Avenue, I was drawn to the simplicity of it all and the linear layout where I could have the option of loading all my usable media in to a single composition. The ability to add effects and manipulate a clip, then duplicate it and add more manipulation and still be able to call that content up when required was an extremely valuable asset for us.

The latest Resolume 5.0 release is the backbone of the production we do for The Hydra. We’ve invested a lot in equipment, displays and lighting fixtures over the last year with the idea that we can control most elements of a show live, with all the lighting and video elements working together in synchronicity, in perfect time with Resolume’s BPM tracker and all running from a single laptop. It’s a fairly new and unique approach to controlling fixtures, using an animated composition as the triggers. We simply design our show layouts in 3D, and export image masks to work from and animate on top of. In Resolume we then map all our fixtures in the advanced output of Arena, sending our DMX over Art-Net and the video via DVI.

It’s the scenography element that most interests us today, we want to design shows that aren’t just focused on the screens and visual / VJ element, but how everything else from lasers to moving heads is incorporated in to the design. 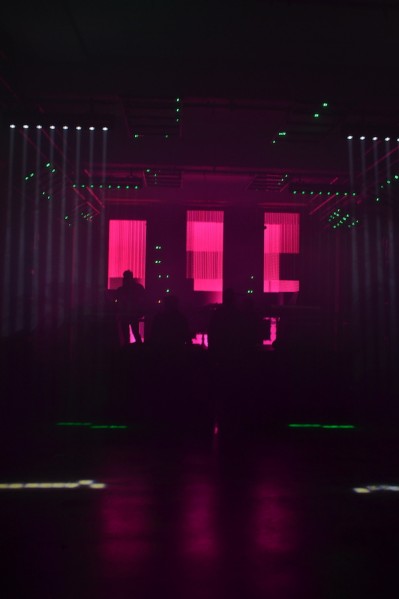 Why did you choose Res over a regular lighting desk? Don't you like endless rows of faders and illegible touchscreens?

Being solely from a video background, DMX is still very new to us and we started with absolutely no experience with DMX at all so it was quite a learning curve to get our head around. Lighting desks confuse the life out of me, I don’t really know where to start. On many international events I would work closely with an incredibly good lighting designer named Ross Chapple, (who now works with the likes of Eric Prydz) and he gave some invaluable assistance in the DMX world.

Lighting desks and operators will obviously be the right way to do things, and we’re not trying to over look their use, it’s just for what we are doing on the smaller scale, it makes a lot of sense to keep everything self contained, which is kind of the same thing we’re seeing in opposite with lighting desks now incorporating more elements of video. Only, that our preferred approach to things is from a video background and using the Arena servers to push the pixels.

You're one of the first to push the DMX integration this far. How is it being an early adopter?

The DMX integration has really stepped up our game, having just one software application running keeps the processing down and means a single machine can handle what we’re throwing at it. It’s been a fairly simple process getting to grips with the advanced pixel mapping features, being used to video and pixel mapping with previous versions of Arena, the addition of DMX follows the same principles in the advanced output and that’s made the transition an easy one. The latest release of 5.0.2 is almost there with all the features we will ever need, we’re regularly running a full 16 universes alongside up to five DVI outputs on dual and triplehead2go’s on a single machine, and Arena is handling things very well!

How was the lead-up / tech setup? Smooth sailing or does it still give you nightmares?

The tech setup for the Hydra was initially a difficult process, the animation, layout and processing of things is fairly straightforward with the main difficulty coming from creating a show that can be setup in a short amount of time and be taken down the next morning. The Hydra venue is a photography studio by day and event space by night and that’s where things have become more time consuming, building a system that can be installed and taken down quickly and efficiently. This also limits our creativity, as we have so many ideas to make large scale impressive setups but the budgets and time constraints mean we have to work in a more realistic manner.

The next Hydra show happens on April 29th and will see the Dutch heavyweight festival Dekmantel come to London and showcase the likes of Joy Orbison, Kyle Hall and Marcellus Pittman. 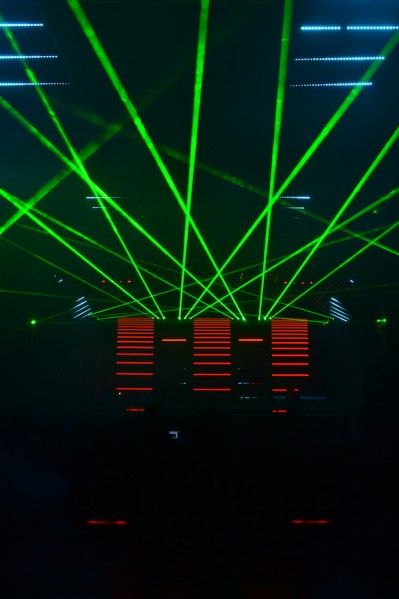 
It would be amazing to see what their input/input map looks like.