On Tour with Zedd: Gabe Damast

Working for Resolume, we're lucky enough to see some of the most amazing VJ talent in action. One such person is Gabe Damast, whose live show for Zedd blew me away. Gabe is a true VJ and seldom we see a show this tight and in sync with the music. And most amazing of all, it's pure VJ skill, no SMPTE or other tricks.

Take a look at the video for an idea of how Gabe rocks it, and then read on below for what he has to say about all this.


How did you start VJ'ing?

My introduction to the world of VJing came through music. I grew up in the San Francisco Bay Area playing saxophone and piano in a couple different Jazz and Funk bands, and as my love for electronic music developed I got into beat making, record producing, and sound engineering. I spent years learning basically every major production software set up a small studio in my parents basement where I'd record myself and my musician friends goofing off, and sometimes they'd turn into actual songs.

At the end of college, a friend of mine showed me Resolume, which was really the first time I was exposed to any visual performance software. I remember a lot of things clicked for me all at once, coming from a background using Ableton Live and FL Studio, Resolume felt like a very user friendly video version of the DAWs I was familiar with. It wasn't long before I got ahold of a projector and started working on my first VJ sets in my tiny dark bedroom late at night. At first I would use found footage and VJ clips from vimeo, but I eventually got into cinema 4D and after effects and started making my own video content, some of which is being used in the Zedd show currently! 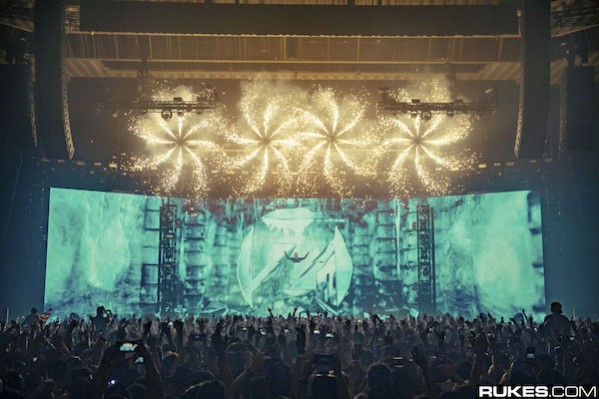 Can you tell us a bit more about the Zedd tour? How does such a tour get organised when it comes to the stage design, the content, the operating of video, lights and laser? Who does what?

The True Colors - which was the latest Arena tour we did with Zedd - all started more than two years ago with scribbles on a paper napkin. Many artists will hire a specific designer to conceptualize a stage production, but from the very beginning, the Zedd touring team been extremely close-knit, and we always share roles and creative ideas freely. Zedd likes to be incredibly close with pretty much every aspect of his live show, so many of the crucial design decisions would happen in a group discussions during a meal at an airport, or a van ride on the way to a music festival. Our lighting director Stevie Hernandez would create renderings of different ideas in vector works pretty much in real time, which helped different ideas evolve and change.

Video content has always been the central focus of the Zedd show (and I'm NOT just saying that because I'm a VJ!!). For the True Colors Tour we wanted to give fans the most immersive experience possible, so the design we landed on was pretty much a giant 84 foot wide LED wall, framed with all sorts of light fixtures, lasers, and special effects. We were able to use an LED wall that was fully 4K in width - a dream come true for any pixel pusher. It's been really exciting to watch the rapid development of LED technology in recent years. Bigger walls, higher resolutions, soon I'm sure we're going to be watching shows in retina quality! In the five months leading up to the start of the tour, we worked closely with Beeple (Mike Winkelman) to create the bulk of the new show visuals rendered in stunning 4418x1080 resolution. Scott Pagano and myself also contributed to the content push, which enabled me to curate an entirely new Zedd visual show from our previous tour.

The thing that stands out most to me is how video, laser and light play the accents in the music as a team, almost like a band. Is this something that you practice?

"Practicing" is always a tricky subject in the world of live production. The cost of renting enough gear to do a proper rehearsal is so high that it only really makes sense surrounding a tour where the costs are being spread over a few months. We were lucky to have two weeks of rehearsals before our tour rolled out, where we built the full size production in a sweaty, cavernous warehouse in Las Vegas, and Zedd, myself, Ken (our tour manager AND laser operator), and Stevie (lights) spent 12+ hours a day listening to music and creating unique looks for each song Zedd wanted to play during the tour. We brought in a mobile studio for Zedd to use, and each day would usually begin with us brainstorming visual ideas, and then taking breaks where me and Stevie could program the looks, and Zedd could work on musical edits and tweaks. It was hard to leave the rehearsal space at the end of the day because we were getting so much done!

It's all live right, no SMPTE? What would you say to people that are just starting out and are looking to get a tight sync like that?

No SMPTE! Every single video clip, strobe hit, and pyro shot are all cued live. That's why our rehearsals took so long. I have a lot of respect for people who put together time coded shows, and there are a lot of things you can do with that kind of sync that just aren't possible with live triggering, but for me, realtime performance is the only way I like to work. Music is what drives the visuals, and Zedd always DJs live, so there is a certain level of authenticity that is communicated by including some human error into the visual performance.

Whenever someone asks me how they should get into VJing, I always tell them to start by understanding music. You can definitely be a technical person and excel in the visual performance world, but in order to deliver an on-time show (with no timecode) you really have to learn music and rhythm. If you have good timing, and understand the basics of music theory, you can put on an amazing show even with the worst video content on the smallest screens. 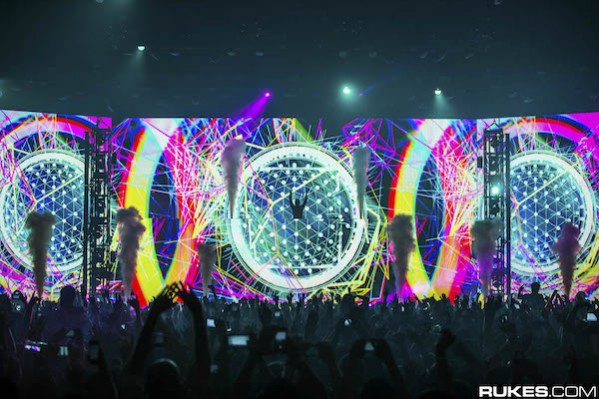 What gear are you bringing with you? Is it easy to deal with airport customs?

For a normal fly-in show, I use a Macbook Pro Retina with three midi controllers: 2 tractor control F1s and a MIDI fighter 3D. My whole kit fits nicely in a Pelican 1510 carryon case, and if customs ever tries to hassle me I just say "it's for making computer music!!!" and they always leave me alone. Flying around with three laptops sometimes raises a few eyebrows, but I've never gotten seriously held up (yet! *knock on wood*)

How does Resolume fit into all this?

Resolume's simple layout makes it SUPER easy to organize our visual show. I always try to think about telling a story through our video content, and all of my Resolume compositions are arranged in a timeline that I navigate around depending on what songs are being played. Since everything is live, choosing a media server that allowed for quick re-organization was really important to me. Add in the first class customer service from the Resolume team, and it's a no brainer! 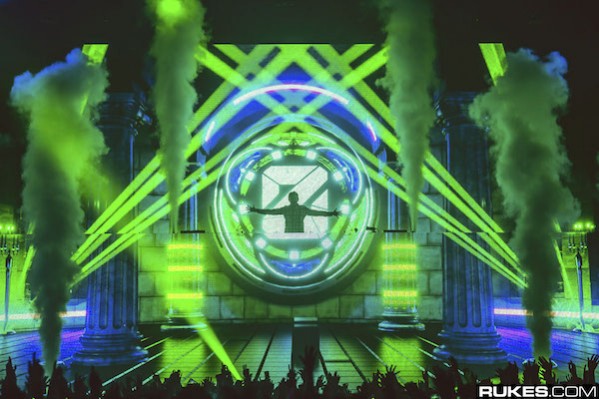 Where can we find you online?

"No SMPTE! Every single video clip, strobe hit, and pyro shot are all cued live. That's why our rehearsals took so long. I have a lot of respect for people who put together time coded shows, and there are a lot of things you can do with that kind of sync that just aren't possible with live triggering, but for me, realtime performance is the only way I like to work. Music is what drives the visuals, and Zedd always DJs live, so there is a certain level of authenticity that is communicated by including some human error into the visual performance. "


Glad you guys featured Gabe! Walking away from the first Zedd show I saw a few years ago, I was super impressed with his timing and energy of the visuals.

A few months later I was at one of their shows and the local lighting equipment had massive technical issues (nothing the tour crew had control over.) His style allowed him to seamlessly drive the whole show and some of the people there had no idea there were issues with the rig. Great example of how doing things live without SMPTE allow you to adapt and crush a show when things don't go as planned.