Say what you will about Facebook, it's an amazing medium to get in touch with people. You can get the skinny on what's happening on the other side of the world, and see things you would otherwise never know about. Case in point: Richard De Souza. I got connected to Richard about a year ago, and since then, my newsfeed started filling up with one jaw dropping stage design after another. Seems like the Australian continent, besides spiders, is hosting buckets of raw talent as well.

Who are you and how do you spend your day?

I am the director of MNVR (Manoeuvre); an Australian based new media company primarily focussed on concert visuals and interactive. I’m always working on something. If not in production mode I’m either VJing or developing custom VJ tools. I love tinkering and I spend most of my free time progressing my art and process.

How and when did you get started in this whole VJ circus?

I’ve had a love of music for as long as I can remember though my strengths have always been with the visual arts. In 1999 The Big Day Out, a national touring festival here in Australia, put a callout for video artists. A friend and I threw a reel together and were selected to do visuals for the Big Day Out’s Boiler Room. That summer we were VJing in front of thousands of people for what was then Australia’s largest festival - I was hooked. It was all Betacam and VHS back then, cueing tapes and mixing cams. VJing at The Big Day Out became my summer hobby for many years and I would spend all my spare time working on show content. Live visuals in the festival dance scene were new here. There were no rules and few points of reference so I felt free to do what I liked. It was hugely exciting being there so early in the Australian scene and has given me the oppportunity to operate visuals for likes of Aphex Twin, Justice, Avicii, The Bloody Beetroots to name a few at various points in their careers.

The industry has changed so much from the early days. Visuals have become a respected and essential part of live performance. As more electronic music festivals took off I made the leap from the architectural industry to full time professional VJ, 3D artist and content producer.

You do a lot of amazing custom tour content. What's your process for coming up with the overall identity of the show and the look and feel of each song individually?

It's always about representing the artist to the best of my ability - put the show first - it sounds simple but many people get that wrong. Vision is there to strengthen or amplify the experience of the music; it should never detract or take over. My process varies on a show-to-show basis. Sometimes minimal visuals and different techniques should be employed but I decide this by getting to know the artist.

The best shows are either a great pairing of musician with like-minded visual artist or an environment that allows symbiosis. It’s really just about gauging the intent of the artist and their music, taking the time to listen and study their person, catalogue, performances and media. If you have spent some time with an artist it's pretty easy to translate their personalities and music visually. Music is highly emotive anyway; it already carries a ton thematic content within to draw from. 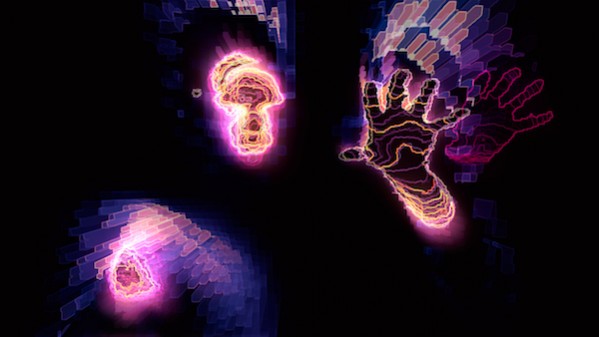 When dealing with single tracks I always consider the hero shot. This is generally a compositionally strong or thematic element that identifies the peak moments of a track. By placing these hero moments throughout the set you can avoid motion graphics run on, where an hour of mograph blends into a singular moment. The idea is that the audience will identify or recall key imagery attached to a particular song strengthening the emotional impact of the show. If you orchestrate these peaks and troughs you avoid a visually flat show.

You also do incredible stage designs. What's your stage design process like? Do you have ideas for specific visuals and design a stage around that? Do you also design the light plan and overall stage deco?

I've done a fair bit of concept design over the years. With my background in architectural visualisation and animation I can flesh out the initial concept to a point where I can sell an idea pretty easily. I’ve also been fortunate enough to work on some big stages at festivals like Stereosonic and Future Music Festival so I have an understanding of what works and what doesn’t.

I tend to think in 3D regardless. Much of my VJ content is 3D animation so stage design for me is just another structural element in a larger meta 3D composition.

I work alongside some very talented lighting designers and production crew that flesh out my initial concept designs. In a larger team environment it’s a matter of letting everyone play to his or her strengths. When you have skilled people around you and everyone has input and ownership of the creative process, that’s the environment in which you get the best results.

You've got a lot of nifty TouchDesigner responsive stuff going on. Especially 'California' on the Peking Duk tour intrigues me to no end. Can you elaborate a bit on that?

The idea behind the Peking Duk show is that it's a post-EDM punk rock show. Everything in the show follows that simple design ethos - from visual design to playback and performance. Visually it’s supposed to look like a live comic book mashup of punk t-shirt illustrations and rock poster art. Instead of using the usual white outs and strobes it has a bunch of animated visual stabs and toon effects that sync up with the different visual tracks. I really wanted it to be a departure from the generic stock mograph look that many shows have.

Peking Duk (Adam Hyde & Reuben Styles) are very active on stage and perform with a rotating cast of collaborators, guest vocalists and musicians. The show is never the same twice but is always a hell of a party so the visuals needed to reflect that. 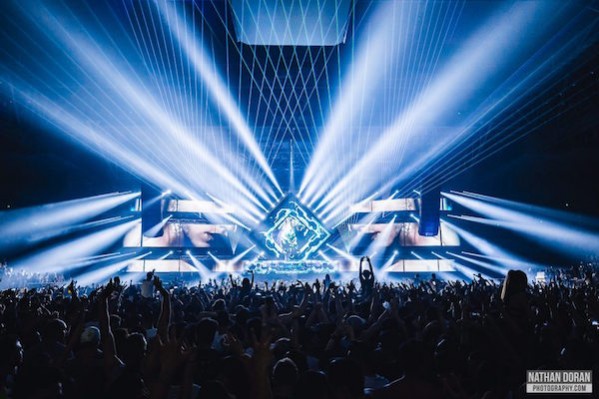 The show is split up into key tracks that Peking Duk are likely to play for which I have accompanying visuals, and then freeform sections that I adapt to on the fly.

California was initially developed in TouchDesigner to carry the freeform sections of the show but it is now used throughout. Basically I'm using TouchDesigner to do audio analysis live, then I render a trigger based texture palette of sprite animations. They are very simple solid pulses, gradient ramps, animated noise that respond to audio. I send these rendered textures over to Resolume via Spout and position them behind alpha channelled layered animations using Visution Mapio on a layer and column basis. I then launch column compositions instead of running a solely clip based show.

The generative element gives the show added life. Having an automated element sitting behind what I’m doing live broadens the scope of the show and creates a much tighter visual experience overall.

VJ'ing at a show like Godskitchen must be very different from regular VJ work. How does it differ and how do you keep a show like that fresh for a full night?

Designing for a show like Godskitchen you have multiple show arcs. Not only do you have multiple artist set arcs, but you also have a larger show arc to take into account. It’s important to consider how a night builds, with the introduction of different elements as the night progresses, from the video rig, to lighting, pyro and lasers.

I usually have some thematic show content woven into the video design that is either audio reactive, real-time or real-time 3D. These framing elements are usually persistent throughout the whole show and are treated like a video light rig rather than just a screen. These design elements tie into the other show elements like artist intros to create a larger show story.

What has your overall software and hardware journey been like? Do you tend to stick to a particular set of tools or do you switch around a lot? You also design a lot of your own software, right?

I started in 3D computer graphics. By the late ‘90s I was working on SGI machines doing real-time 3D interactive environments in VRML. It was definitely a revelation - real-time 3D, graphics acceleration, interactive and web deployment but there were many things you just couldn’t do because the hardware and software weren’t up to it.

My interests haven’t really changed but hardware and technology have caught up. The only limitations now are time, resources and budget.

I jumped on laptop VJing as soon as I could. Originally I was pushing out 3 layers of 320x240 on Resolume 2, which seems ridiculous now, but given the tape-to-tape alternative, at the time it was revolutionary. Resolume is still my core go to performance application.

I’m a bit of a control scheme nut. I have a somewhat ridiculous midi controller collection and I'm always working on new control schemes. My TouchDesigner work creating custom performance interfaces is just an extension of that. I’ve always wondered what touch screens or motion controls like Leap Motion would be like in live situations so I created my own custom tools to integrate these elements into shows. Having my own tools removes many technical limitations and allows me to focus on the creative. For me creative is always at the forefront but sometimes there are technical hurdles to navigate first. 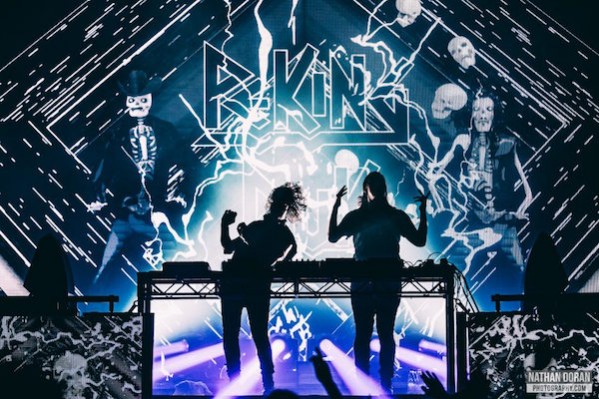 
How does Resolume fit into all this?

Resolume has been hugely influential as it’s the first real-time compositional environment I used. I’ve always used it like a real-time version of Photoshop or After Effects. The immediacy of feedback that Resolume gives is essential for my creative process. It has influenced many of the software and workflow directions I’ve taken over the years.

I actually run through compositional design sketches in Resolume, creating collages of ideas and forms from video elements and effects that I then round-trip back through the preproduction process to create final artwork.

Even when working in TouchDesigner I pass the output through Resolume via Spout. Resolume’s video playback, effects stack, layer routing, and mapping are just so extremely powerful and flexible I can’t imagine creating a show without those tools.

Who is currently blowing your mind in your field?

I have always loved UVA (United Visual Artists), their work for Massive Attack in particular the 100th Window Tour was inspirational and influenced me to follow live visuals as a career path. Their blending of sculptural architecture, vision as lighting and considered space is fantastic. To this day they still do beautiful, political and thoughtful work.

Where can we find you online?

I can be found online at http://www.manoeuvre.tv Posted by Joris on Tuesday August 9, 2016 at 15:50 Tags: artist * interactive * manoeuvre * mnvr * richard de souza * stage design Login to the forum to comment.