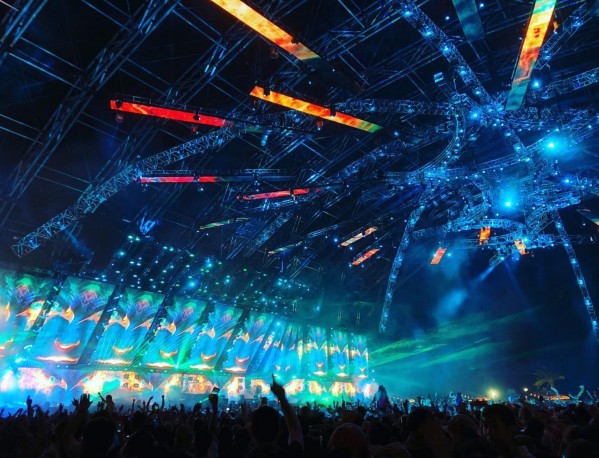 On a fine sunny afternoon, in 2014, Joris de Jong was holed up in front of his computer, of course. Apart from a full- time job serving coffee at Resolume HQ, he moonlights as a video operator. And that day he was mighty frustrated.

Joris had gotten sick of customizing and then rendering the same content, over and over again for every show he played- with minute changes in timing and position. “There has to be an easier way!” he thought to himself, sipping on below average coffee that he had not brewed.
And so, Chaser was born.

Chaser is a plugin that serves up the perfect solution to VJs who play a lot of different shows and do not have time to render custom content for each show. It makes a job, that would take hours, happen in minutes. It enables you to create chase effects, screen bumps and sequences based on your input map (That’s right, INPUT) in Resolume.

Chaser converts the slices you create in your input map to “buttons” that you can toggle on & off- and so create different chase effects & sequences. Read all about the why’s & how’s here.

Once you are ready with your different sequences, you can apply chaser as an effect (to your composition, layer or clip) in Resolume and voila! You’re ready to chase that kill. 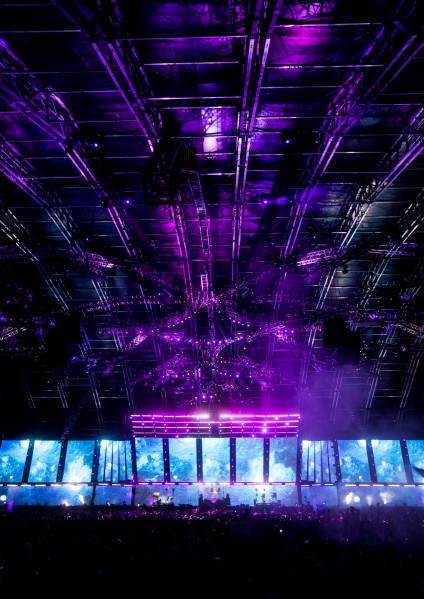 Visual artist Sandy Meidinger, on duty for Illenium, served up slices as delicious as grandma’s black cherry pie. She diced that LED up nice and fine and thoroughly used (and abused) Chaser- to its full potential.

Thank you for talking to us Sandy. 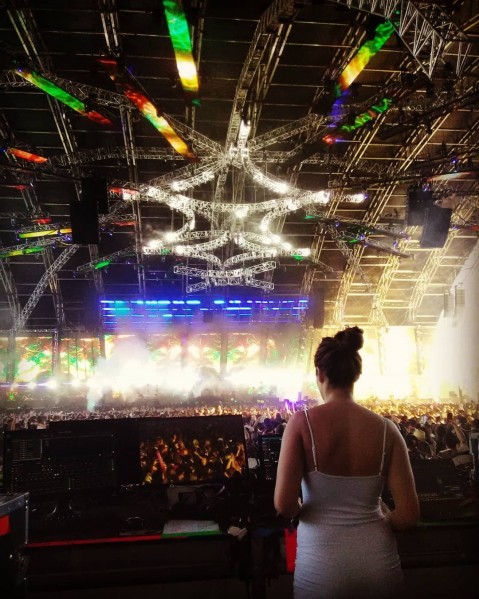 Let’s start from the beginning. How did this visual journey begin for you?

In 2012, I was finishing up my undergraduate degree in Graphic Design and I had to take an After Effects class. During the first weekend of the semester I went to a rave and noticed the videos on the LED screens looked like they were made in After Effects. That night I decided that I was going to learn how to do that, and so I did it.

Living in Southern California made it easy to connect with other VJs. I’ve spent the majority of my career as the house VJ at Create Nightclub in Hollywood thanks to V Squared Labs but it was the word of mouth among the artists that got me my job with Illenium.

So, what is working with Illenium like? Tell us about his show & his set at Coachella.

I love working with Illenium. I work very close with him and his team and over the past 18 months we’ve become like a family. They care a lot about what the visual show looks like, which makes my job even better.

We run two shows now, a DJ set and a live show. The DJ set is Illenium on CDJs and me mixing and triggering the videos by ear. The live show, which we performed at Coachella, is run by Ableton. For the visuals, Ableton sends MIDI to Resolume. I’ve used this system for about 40 shows without fail.

Coachella was one of the later shows using this system, so almost all of the show had already been created. We added some new content for some new songs but the main thing I had to worry about was mapping the 2 x 4k outputs. I was able to upgrade my machine to one with a GTX1070 before the show.

What made you start using Chaser & what has it made easier for you?

I started using Chaser in its very early stages, during the release of Resolume 5. I remember reading the manual and being fascinated by the input mapping. Everyone I knew at the time had been using Layer Routers to route slices, and I was never able to fully understand or practice it to incorporate it into my show.

The input map made a lot of sense to me and I haven’t looked back since. Up until very recently, Chaser was the only mapping tool I used for many shows and I still use it on its own for stages with smaller outputs.

And so, we come to Chaser & Coachella. Give us all the juice, please.

Here are the video map & pixel maps of the Sahara Tent at Coachella 2018: 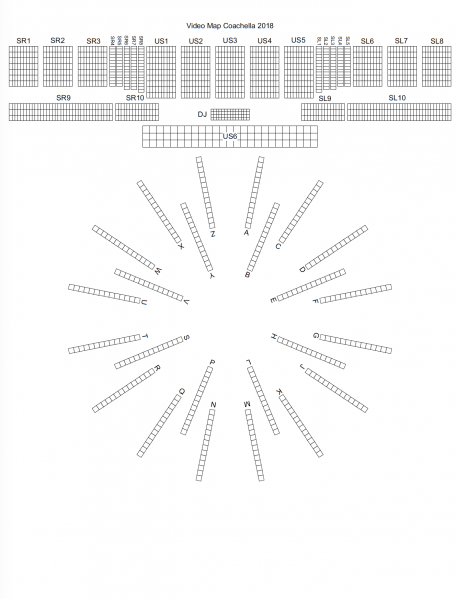 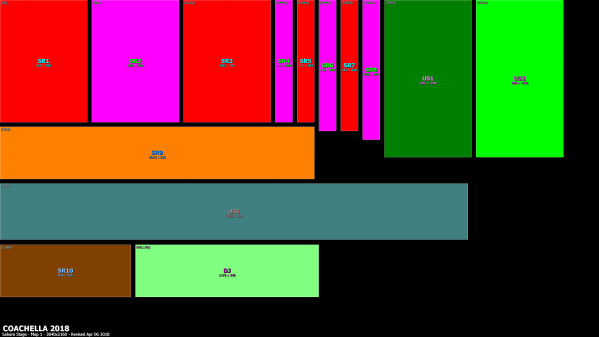 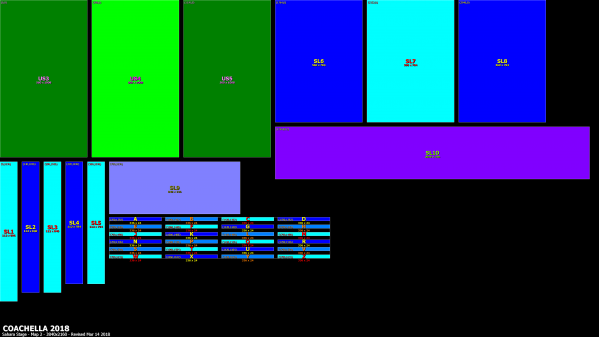 Since the majority of the live show is run by MIDI from Ableton I am able to focus more on mapping and how all the content fits on the stage. For extra- large stages I use a combination of the Mapper plugin from Dvizion as well as Chaser.

Mapper handles the overall placement and look of each video and I use Chaser for some extra flair. One way I organize my looks through Chaser, is to create an extra screen that is not outputting for each look. This gives me room to play around while knowing that I will not be messing with anything on the output side.

There is a point in the show where I flash the Illenium logo in a grid that is formed by the design of the LED panels.

Because of the 2 x 4k outputs, I had A LOT of pixels to work with. I ended up with 473 number of slices across the whole input map. If I could redo it, I would increase the scale of the grid because the number of slices loses your eye too fast for the amount of time I use this part.

Other looks I create with Chaser are for the content to flash randomly with each panel as a whole. And to split the screens in half and flip one side to create a mirror effect. 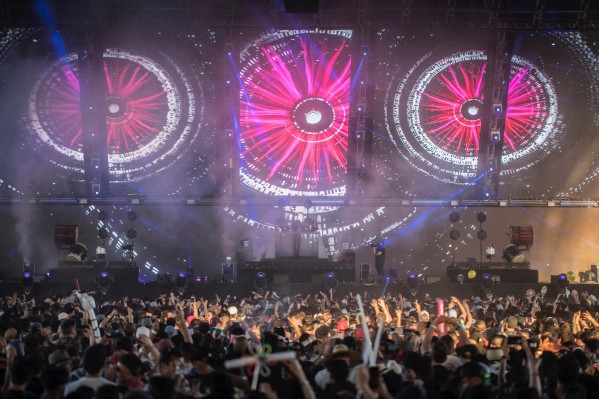 I also use it to map the LED for our hologram DJ booth.

What is the hologram DJ booth?

The DJ booth is an acrylic structure with 3x2 6mm panels on the bottom that reflect onto a transparent film. This creates a "Pepper's Ghost" hologram effect. 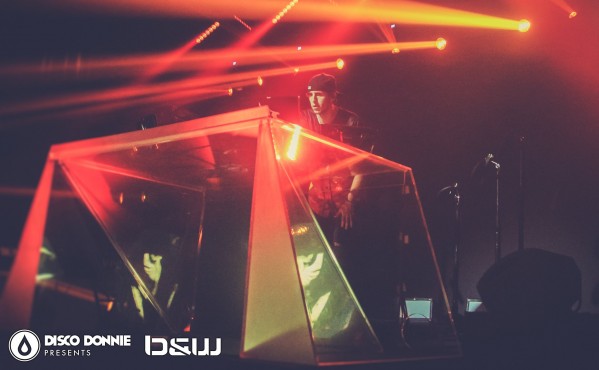 We bring the DJ Booth with the live show as often as we can but because of its size it doesn't always work with the festival stage setup. Most of the time it is run from the third output of my laptop and in Resolume I have it on its own layer which is routed through Chaser. The clips are triggered through MIDI by Ableton the same way the rest of the show is.

Did any issues creep up on you while programming? How did you deal with them?

Most of the programming for the show was done at home. Since I use input maps, I had a good idea of what the content was going to look like before I got on site. I had zero issues using my map during load-in and the show. I was even able to finish my programming on site in less than an hour thanks to Chaser & Mapper.

The only issues our show had was from using our network on the VLAN over fiber and the Ableton MacBook Pro overheating in the sunlight.

Sigh. I can’t even count the number of “MacBook Pro overheating” situations I’ve heard of.
And so, tell us about your rig. Anything on your wish-list?

One thing I’m looking forward to doing this summer is getting a PCIE 2TB SSD.

And what about your wish-list, software- update wise?

A feature I would love to see in Resolume would be to be able to drag & drop columns. In my compositions, each song is its own column so I stack the chaser effects above it. When Illenium changes the order of the set I have to move each clip individually. This would help out a lot especially in my DJ set show file.

For Chaser, being able to select multiple slices with something like a marquee tool would be a huge time saver for me. The new update with exporting the input map as a PNG will definitely help me out for the large stages.

Finally, please drop some slices of wisdom for our budding Chaser users out there.

Just like learning anything new for the first time it just takes practice! It takes a moment to wrap your head around the concept of using the input map, but once you figure it out the possibilities are endless.

The Resolume crew loves the fact that you recognize and appreciate the value of Input maps, Sandy. Keep up the great work.

For everyone who is interested in learning about input maps and other cool things you can do with Arena 6, check this video out:


"sipping on below average coffee that he had not brewed."