What happens when a bunch of artists, architects, programmers and engineers come together? A burst of creation with a dollop of technology. Minimal yet complex. Simple yet amazing. This is what Litewerkz is. 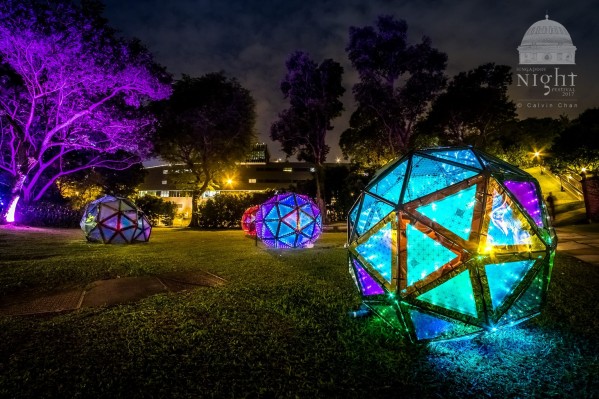 Formed by students who met at the Singapore University of Technology and Design, Litewerkz is a newish design collective- with lots of vision. Gradually growing from indoor static installations to outdoor dynamic installations, they have worked at developing themselves by welcoming new members and perspectives, every year. 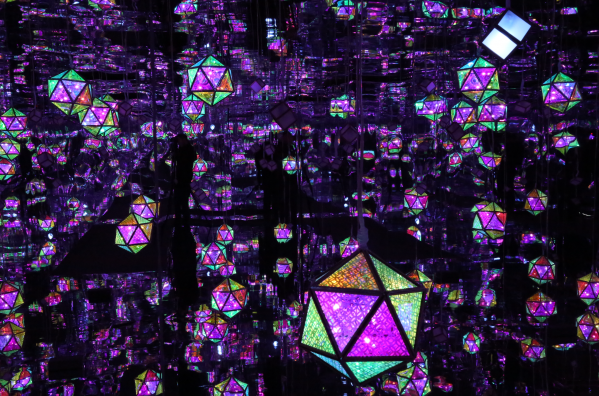 Their installation this year at the Singapore Night festival really caught our eye. Named “Orbit” it was quick to evoke our inherent space obsession. With a central orb (as the primary source of energy- the sun), the installation consisted of different orbs (planets) with retroreflective cores, all wirelessly linked to each other. Very cool & scientific. 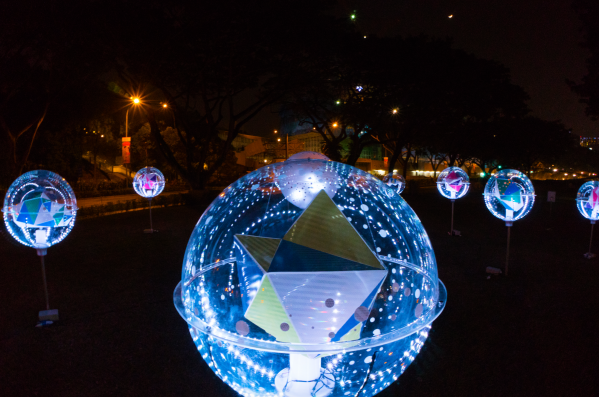 So, how did the idea of “Orbit” as an installation come to you.

We’ve worked with 3M (a global science company) on previous installations, making use of their iridescent films. These were displayed at the Singapore Night Festival in the past few years.

This year 3M came to us with a challenge to use their retroreflective materials. These materials are used on traffic signs and safety vests, so we really had to think hard about how we could use them in an art installation.

3M gave us the creative freedom, and provided us with custom colors of these materials, which really helped us achieve our vision for the installation. 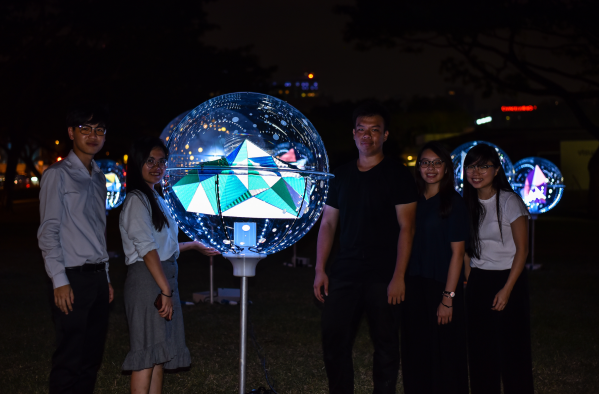 We think they were really happy with the result as they have never seen their product used in this way.

Tell to us about the Installation- from idea to production.

Orbit is an abstraction of our solar system; 8 planets around a sun. Each of the planets and sun are individual units and react when the visitors spin them. The LED lights inside illuminate the planets and its unique make-up. 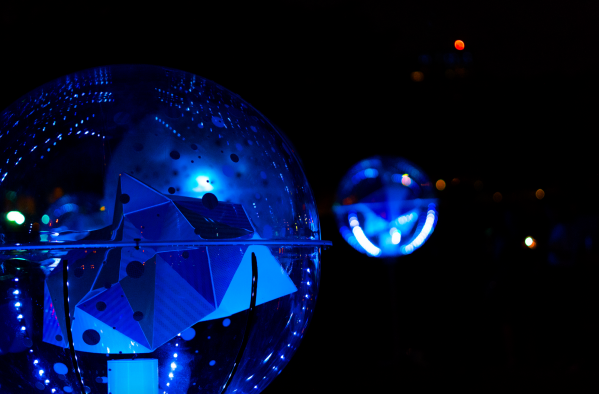 Within each planet is a unique polygonal gem, covered with retroreflective material. It is this gem that lights up with the use of flash photography or videography. 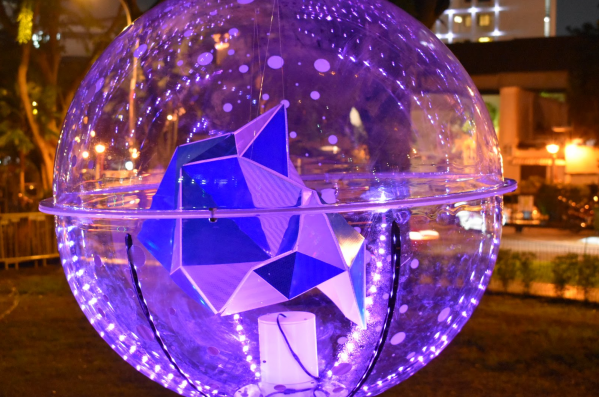 This gem is made computationally with the use of Grasshopper, cut on a corrugated board with a zund cutter, and assembled by hand.

Each planet uses a Particle Photon to connect to the main server, an Intel NUC. Each Photon has an app that allows it to understand the Artnet commands broadcasted from the NUC. With a MPU6050 6-axis accelerometer and gyroscope, the app is also able to detect the rotational speed and allow the planets to react accordingly.

While stationary or slow speed, the planets glow at half-brightness. 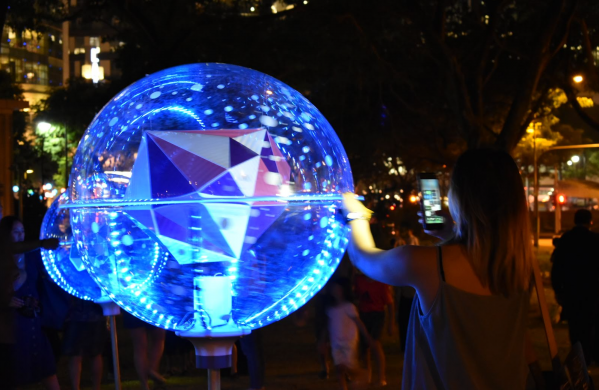 At high speeds, the planets will then glow at full-brightness. 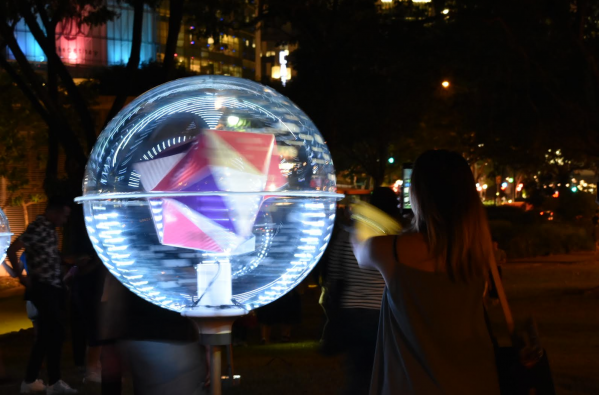 Resolume runs on the Intel NUC, and allowed us to easily setup each planet and the sun; it allows for easy LED mapping as well as sequence control.

Tell us about the hardware that went into Orbit. 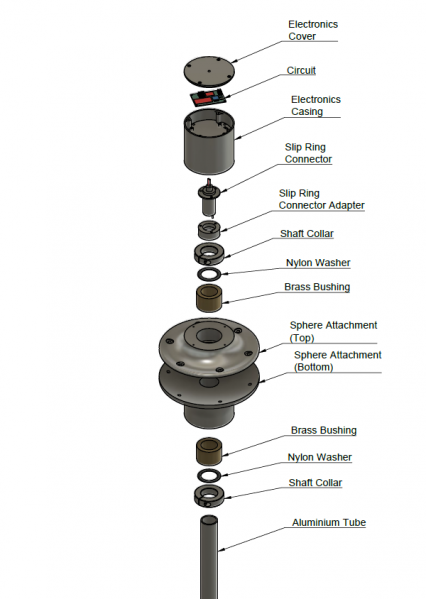 We went with an Aluminum tube for the shaft as it was easy to cut and was very sturdy at 40mm diameter. We opted for a brass bushing due to its low maintenance and low pricing.
We used a slip ring connector to transmit power from the stationary shaft to the rotating spheres. This is the centerpiece of the installation, the interface between the stationary aluminum tube, and the spinning sphere. Finally, the sphere holders were 3D printed in PET-G. PET-G was chosen as it was more heat and weather resistant as compared to PLA, important in the Singapore climate.

In our earlier versions, we were able to engage a printing service to print it as a single piece. But this single piece print took too long and demanded a large print bed. We then designed a split version so that each piece is printable on common print bed dimensions. The split versions aligned with each other with printed pins and holes. Split sections were secured with a PVC tube section and also when the attachments are screwed to the sphere.

And what exactly is retroreflective material?

What this meant to us as artists, is that this material gave us an opportunity to design experiences that were unique to each individual’s perspective, and we sought to exploit this property in our installation. We encouraged visitors to turn on the flash on their camera phones while taking a photo or video, which would allow them to see the effect of retroreflection unique to the perspective of their camera. 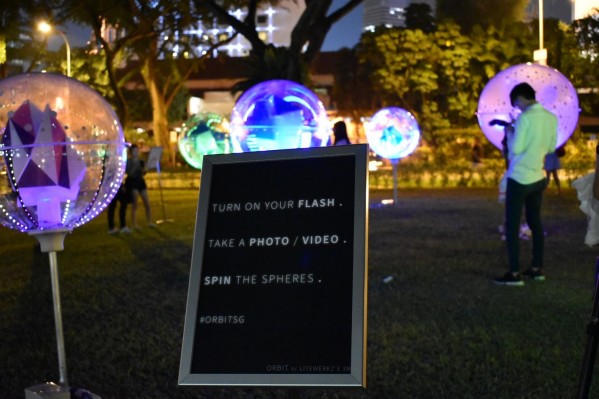 Cool! So now tell us about the LED pixel strips. What purpose did they serve, how did you link them all and how did you manage to link their intensities with the speed of rotation of the orbs?

The LED pixel strips serve as a source of light for the retroreflective gems at the center of each sphere. We also intended for them to be eye catching from far, so that visitors nearby would be attracted to the installation. 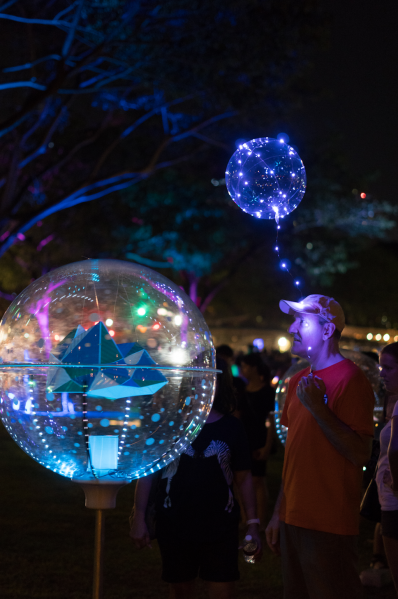 Beyond these simple functions, we tried to see what else we could do to make the LEDs more interesting. We decided on a light show synchronized across all the spheres. This initially meant running data cables between the spheres, but we managed to find a microprocessor that had WiFi built in, and the relevant ArtNet and WS2812 LED libraries. There would be a central server pushing out the ArtNet signals, and the micro-controllers listening and displaying these signals. This gave us the ability to design light shows synchronized across all the spheres.

We used the MPU 6050 6-axis Accelerometer and Gyroscope, compatible with the libraries available for our micro-controller. After much discussion, we settled on a simple increase in intensity while the sphere rotates, localized to each sphere, as we felt that this would provide a feedback to the audience that is intuitive.

So, the Particle Photon micro-controller is clearly super important to the installation. Tell us more about it.

We chose the Particle Photon as it seemed really easy to connect it to the Internet and also debug with the status LEDs. Particle also has tools like the Particle CLI to help make setting it up and debugging easy. It also helps greatly that the Particle team does great documentation.

The Particle Photon has Digital Input and Output pins for us to control the LED lights. It also features a I2C bus which allows us to use I2C devices like the MPU6050 6-axis Accelerometer and Gyroscope Module.

We especially like the status LED for debugging. The different LED colors and patterns correspond to a list of statuses for the Particle Photon. This made it very easy for us in identifying what remedial action should be done without the need for a serial monitor.

Another benefit of having a micro-controller that connects to WiFi is the ability to push new code onto the micro-controller without having to connect a USB cable. This meant a lot time saved for us, as connecting a cable would require us to open up the sphere and electronics housing, for each of the 9 spheres 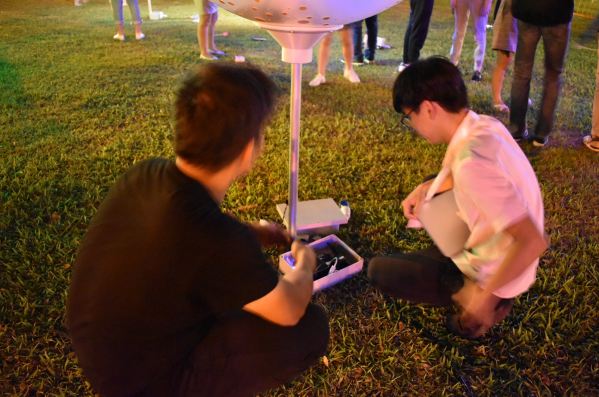 To put all these components together, we designed and printed a PCB. This PCB sat in the centre of each sphere, in a housing, and spins together with the sphere. 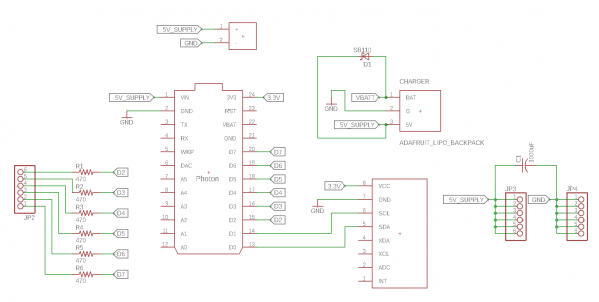 The PCB design allowed for us to easily put together the various electronics components. It also made the soldering and connections more consistent.We added a lithium-polymer battery backup system to prevent the micro-controller from shutting down if power connection is lost when the planets are spinning. 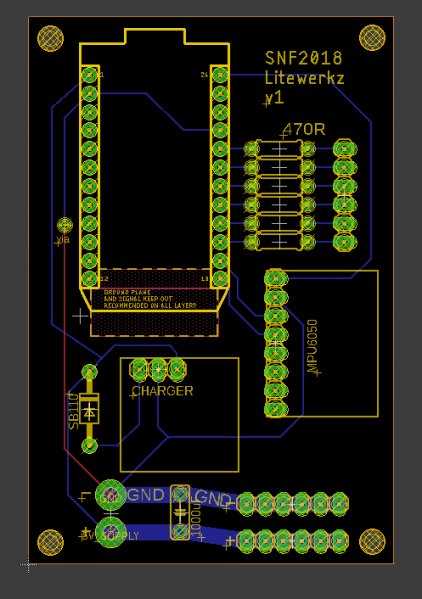 The PCB design was done on EAGLE, a PCB design software that is free for hobbyist and makers (this free version has limited features). The other good thing about EAGLE is that it works well with Fusion 360; PCB designs can be imported over from EAGLE to Fusion 360, allowing for inspections on the sizing with the overall design.

And so, tell us about the role that Resolume played in this installation.

Resolume allowed us to easily setup each planet and the sun; it allows for easy LED mapping as well as sequence control.

The central Intel NUC with an integrated GPU ran Resolume, and we mapped every planet to a section of the template. We came up with a template of 31x32 pixels to represent all the pixels in the whole installation. Eight 6x16 rectangles are mapped to the eight planets, and a 7x32 rectangle is mapped to the 7 smaller spheres within the sun. Each Particle Photon has a static IP, and we simply mapped each section of the video to the corresponding IP address. 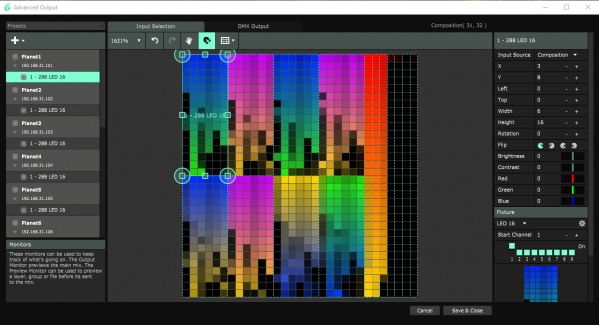 After exporting the video sequences, we loaded them all into Resolume and set them to autoplay on start, and autopilot. All this happens when the power to the computer turned on, which meant we could let anyone turn on the installation without having to meddle with a computer. 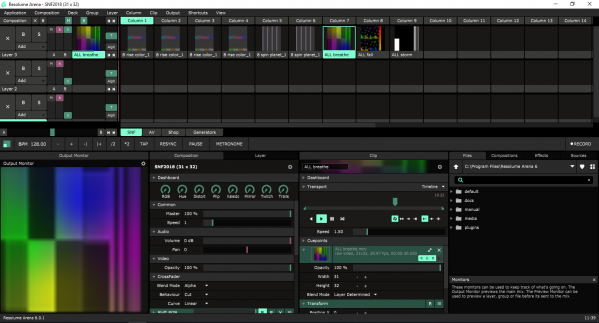 We could have used code to run the entire installation, but the workflow of using After Effects to design the sequences, and Resolume to pixel map and convert this video into ArtNet, gave us the ability to quickly visualize new sequences.

It also democratized the designing of sequences within our team, as we no longer require coding knowledge to design sequences. Anyone can now export a sequence, put it onto Resolume, rearrange the playback sequence, change the speed, or add any other effects.

That is such a great way to use Resolume

So finally, considering the whole setup was wirelessly linked and controlled- I'm sure you faced challenges..?

Linking everything wirelessly gave us a lot of convenience, but of course we had to deal with the downside of using WiFi. We noticed that when the festival got crowded, the micro-controllers tend to disconnect from the network, and would freeze on the last received ArtNet frame. We then had to power cycle these frozen micro-controllers from time to time. It could have been interference from mobile phones with their WiFi and Bluetooth turned on, or because our low powered WiFi router was not equipped to deal with 10 simultaneous connections (1 server, 9 spheres).

Apart from these minor problems, we felt that wireless is the way to go logistically.

Interactive installations take the biggest abuse. The PCB was initially designed with female header pins for the outputs but when the wires keep coming out when the planets were spun, we replaced them with screw terminals to ensure that they were held in place.

On the first day of the festival, we witnessed kids and adults using all their strength to spin the spheres as fast as they could. 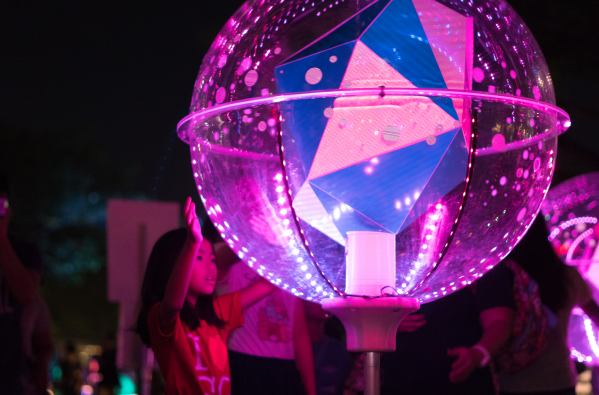 Well, can you blame them?

Thank you Keith & Team Litewerkz for talking to us. We look forward to seeing more of your cool work.