The Ultimate Guide to Multiscreen Output with Resolume 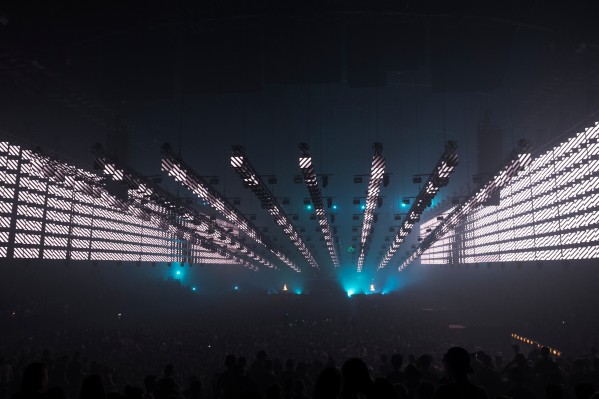 “I want to connect a dozen and then some screens, what hardware should I get?”

We get this question quite often.

The question sounds simple, the answer is always complicated. It’s the same as asking: “I want to buy a house, which house should I buy?”

As you all know, Resolume stacks layers vertically. To us, it always felt a bit weird to control those layers with a midi controller that puts its faders horizontally. So we got this little guy in the office because we liked the vertical fader layout, and wanted to see if it was a good match for Resolume.

Arena 5 made outputting to LED strips a piece of cake. Arena can sample the video pixels and output RGB values to the strip via DMX.

DMX is great, because it’s been around since forever and has become an industry standard that most devices will be able to work with.

The downside is that it has the concept of ‘universes’, which is basically a fancy term to describe all the lights that are on a single control line. A universe is limited 512 DMX channels. This is fine for conventional lighting setups, and was more than enough when the protocol was established way back in the eighties. But with every RGB pixel taking up 3 channels (1 for Red, 1 for Green, 1 for Blue), you can only control a maximum of 170 pixels per universe. With LED strips becoming super cheap and more and more high-res, building anything fancy can quickly require 10 or more universes. 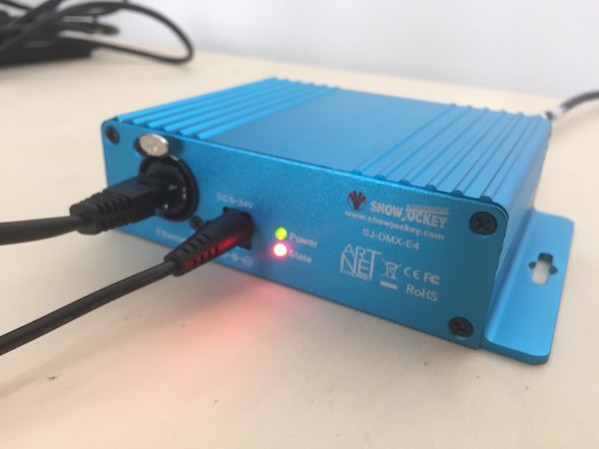 'I need to send 3 videos to 3 outputs, what graphic card do I need?'

We get these questions a lot and there is no easy answer for them. Performance depends on a lot of factors, and any recommendations we make are usually outdated a week later.

So we thought we'd try a different approach: the Resolume Benchmark, patent pending.

Click here to view the results in a handy spreadsheet!

Onwards! To 4K and Beyond the Infinite

Club3D is a hardware company that, aside from making AMD and Nvidia graphic cards, make a lot of useful adapters, dongles and gadgets. For instance we’ve been using the Club3D USB to DVI dongles quite a bit to add an extra highdef output to a laptop setup.

Here’s the nitty gritty on this little gadget.

Review: Hands On with the Spark D-Fuser

By now we all have figured out that analog video connections are not the way forward. Being limited to SD resolutions is just one thing. Those of you that ever tried to do a pixel mapping on a LED wall via a scan converter and an Edirol V8, you will know that pixel perfect digital connections can be better than free beer and pizza under a hot shower.

Trouble was that up until last year, there was no hardware mixer available that could mix between two digital sources. None that a normal person could afford anyway.

SINCE WE ARE STILL GETTING EMAILS ABOUT THIS, THREE YEARS AFTER IT WAS POSTED: THIS CONTROLLER IS NOT REAL. IT'S AN APRIL FOOLS' JOKE. IT'S JUST A TRICK USING PROJECTION MAPPING. THERE'S A PICTURE AT THE END SHOWING HOW WE DID IT.

Which is the best Midi controller for Resolume? If we had a penny for every time we are asked that question, we would be sipping caipirinhas developing Resolume on a sunny beach island resort.

But now we can finally answer it. This one!

This is a prototype of the upcoming custom Resolume controller that we have developed together with Akai.

It’s got full support for the Midi protocol, but the truly great thing is that it also has video feedback. The buttons are custom OLED buttons, that receive video data via OSC. So you can actually see what’s playing, and see a preview of your clips, with the active clip in full motion. Thumbnails are even updated in realtime when effects are applied. 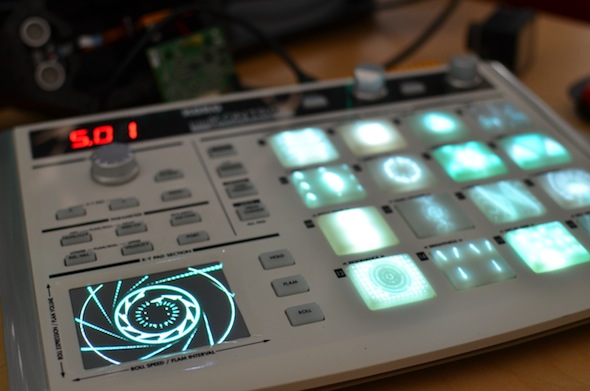 All this OSC is actually controlled by the processor of an AR.Drone helicopter. After Bart ’accidentally’ broke ours (by landing it upside down from a first story building), we found out its internal motherboard actually runs Linux. We took this out and put it in the Midi controller with our own custom Linux distribution on it. This allows the controller to receive pixel data wirelessly with little to no delay. 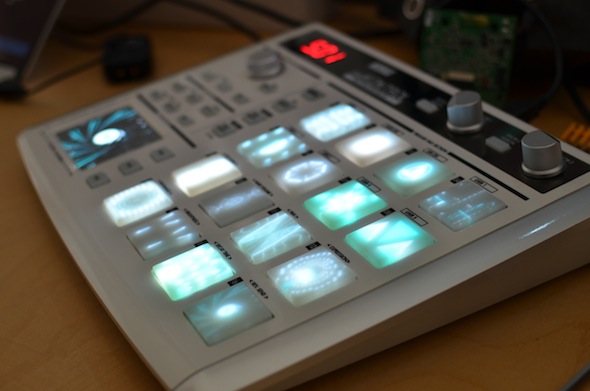 We truly believe that this is the future of controllerism!

//EDIT April 2nd//
So to prevent people from sending emails asking about this controller two years from now, here's a little making of shot. Check out that duct tape action. 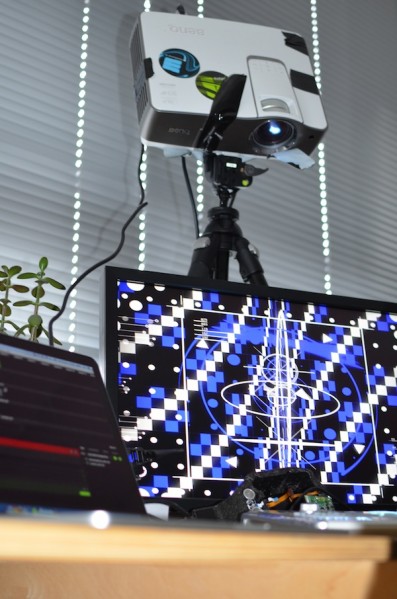 So yes, it was a hoax. Hope you all had a good laugh about it, and see you next year