Version 7.11.0 is a universal build on macOS. This means that it will run the native ARM architecture on macs with Apple silicon and it will run the native Intel architecture on macs with an Intel processor. All our software already ran great on M1 macs because those machines are very fast and efficient and because Rosetta emulation works just fine. This new universal build does not bring much performance gain on an M1 machine but it's nice to have it running natively without emulation.

Delay Effects
Travel back in time! The Buffer and Ring Buffer nodes now accept texture2d so you can create delay effects with Wire. Delays are a lot of fun but do be careful with long delays because they eat VRAM for breakfast.

New Blend Modes Menu
Quickly selecting a different blend mode for a layer was always a bit of a pain in the a$$. You got this huge list of blend modes and transitions but often use only a handful. With the new blend modes dropdown menu you can favourite the blends you use the most and fold down the rest so they are out of the way.

Wire Test Slices
Creating a patch with slice inputs in Wire was like programming blindfolded. There was no way to see what your slices were doing until you loaded the patch in Arena. But now you can enable some dummy test slices on the Slices input node in Wire so you can actually see what you're doing before loading your patch in Arena.

Arena & Avenue Fix List
#17075 External Key/Fill with Blackmagic cards does not work as expected
#16708 Transform positions from v6 clip can translate to wrong position in v7
#16888 Turn on ZeroConfig for WebServer
#16940 Render from mp4 can have crackling at the peaks
#17021 Mouse sets color on both mousedown and mouse release on color picker, should only do it on down
#17079 AV clips can reset their in/out point going from 7.8 to 7.9
#17109 Crash unplugging thunderbolt hub
#17114 Text parameters are missing from the REST-API
#17124 Crash opening Advanced output with v6 AdvancedOutput.xml

Preview Advanced Output Screens & CrossFader
Since version 7.7 you can create as many preview monitors you like and directly monitor layer and groups. We're now taking this one step further by introducing preview monitoring of screens from the advanced Output and the CrossFader. Open the monitor menu by clicking on the radar icon in the bottom right of every monitor.

Node Library Search Improvements
Version 7.9 changes the way you patch in Wire forever. The Node Library with search can now be brought up by double clicking on inlets & outlets and by double clicking on a wire. This makes patching sooo much faster! You can also now select a node, press CMD + ENTER on macOS and CTRL + ENTER on Windows to open the node library, search what you're looking for and press enter to the create the node, this way you can use the mouse even less and patch even faster.

Installing Wire Patches
Drop a compiled Wire patch onto Arena and Avenue and it will be copied to the correct folder and show up in the Wire category on the Effects and Sources panels instead of listed as a "normal effect".

Resolume 7.8 | Control & Monitor Arena, Avenue and Wire via the REST-API

With the REST-API and built-in webserver we're introducing by far the most powerful way to monitor and control Avenue, Arena and Wire. With the REST-API you can get and set any parameter value in the composition and you can even get clip thumbnail images! Communication via the REST-API can be done in almost any programming language, but most importantly in Javascript. This way you can for instance control and monitor your composition and Wire patches via a web-page on a tablet or phone. Checkout this support article for all the details and links to the API documentation.

We have created a few examples that are very useful already. For Arena & Avenue there is a basic clip triggering webpage that is a great companion next to your MIDI controller to trigger your most important clips, you can easily identify them because they show the clip thumbnail and highlight when they are playing just like Avenue & Arena. There is also a basic recreation of the Arena & Avenue interface in a webpage to show that you can control almost anything.

For Wire there is a basic example that shows the input parameters for the current patch so you can preview and control it from any web browser, including your phone.

These examples are bundled with 7.8 and run out of the box but they are also open source projects so you can use them as a starting point for your own custom interfaces.
You enable the REST-API and webserver in the Preferences.

Download
Select "Check for Updates.." in the Avenue or Arena menu and it will self-update, including Wire. Or checkout the downloads page. Comment »

Multiple Preview Monitors
You can now make as many preview monitors as you like. Become a creepy surveillance guy and spy on all your layers, groups and your composition at the same time in Avenue and Arena. Right click on a monitor to duplicate it and use the cogwheel at the bottom right to change what you want to monitor. In Wire you can now also create multiple preview monitors and pin them to any node you like. 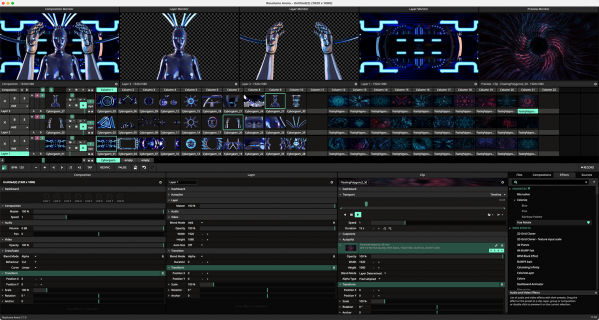 Effect & Source Favorites
With so many effects and sources you are sure to have some favorites. With the release of version 7.7 you can now favorite your effects and sources. Simply click the heart icon to favorite an effect or source and they will show up at the top of the lists, within easy reach. 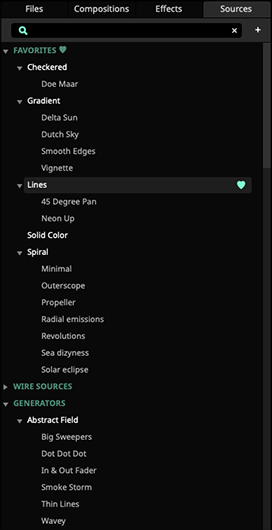 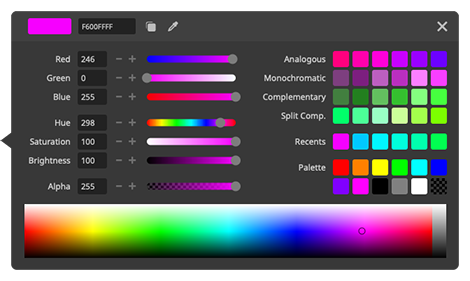 Download
Select "Check for Updates.." in the Avenue or Arena menu and it will self-update, including Wire. Or checkout the downloads page. Comment »

This update takes the customization of Arena and Wire to a whole new level.
We've got undockable panels, customizable interfaces, color coded nodes and multi-screen support for you.
Besides numerous bug fixes we've added a brand new video exporter to Resolume Wire. 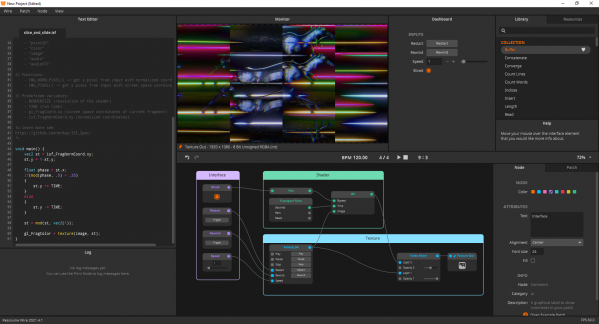 Custom Layouts
We’ve taken the layouts to a whole new level with this update.
Arena, Avenue and Wire now have undockable panels.
This feature lets you create custom multi-screen interfaces with ease.
Wire now has moveable panels, so you can create custom UI’s that fit your needs.

Colored Nodes
To continue this wave of customization, we would like to introduce you to colored nodes.
Color coding nodes helps you to organize your patch.
In addition to this we've given the comment node the option to be hollow.
This helps you to group nodes together, all in the name of beign organized! 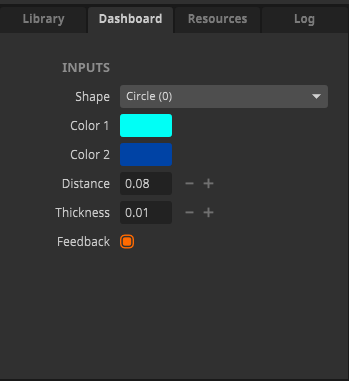 Video Exporter
You can now export the video from your patch directly from Wire.
After you’ve made your latest Wire masterpiece you can easily export it to a video file using the brand new Video Exporter. The Video Exporter inherits all it's features from the Arena/Avenue exporter, so expect all your favorite codecs to be included. 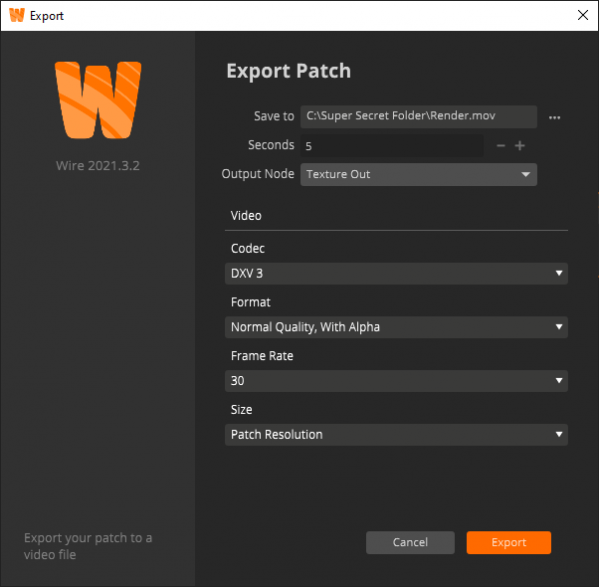 Dashboard
Wire has a new tab called the Dashboard.
In the Dashboard you can reorder your input nodes.
The order you make in the Dashboard will be the order that shows up in the Arena/Avenue interface when running your patches. 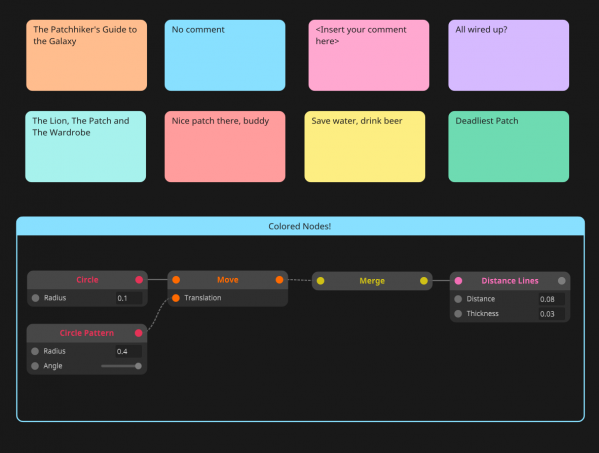 Avenue & Arena 7.6.0 Fix List
#14495 Paste audio effects not redone.
#14765 Clip toggle OFF doesn't respect beat snap
#14823 Update NDI to v5
#14979 Duplicating slices when you have already a lot, changes slice's and other slice's look
#15140 BPM synced params with start set to clip trigger, can get out of sync with clip transport set up the same way.
#15888 Option to disable update checks
#15910 Resolume doesn't reconnect to Syphon inputs
#15977 Universes span back to to S0:u0
#15991 High CPU in handling lots of DMX input
#16028 Some Solid color sources load saturation at 0 instead of the default 1
#16037 Rendering image sequence clip, only first frame is included in the render
#16115 Panels can get placed to the wrong place moving them around
#16122 8k options missing for decklink 8k capture card
#16144 Update minimum requirements to macOS 10.12
#16152 Slice outlines and corner handles are not aligned at high zoom
#16250 Sort Advanced Screen Setup presets by name
#16379 Patch installation fails if the shared Patch folder doesn't exist yet
#16409 Effect in panel doesn't resize when loading presets

Arena DMX Spanning
When working with LED strips or a lot of fixtures you had to manually manage multiple DMX universes in the Advanced output of Arena. But not anymore! with version 7.5 Arena will automatically create as many universes as you like. This is huge time-saver when working with many DMX universes. 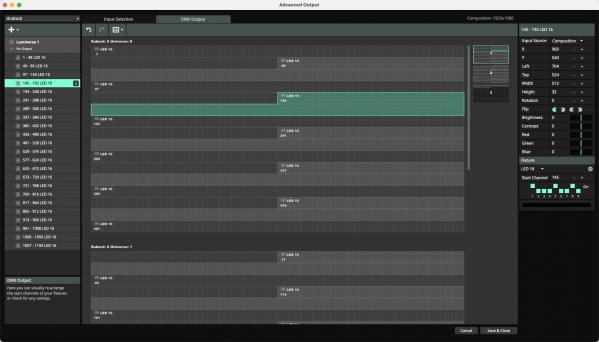 Wire
This version of Wire comes with several cool new features, such as auto-repeat for instance counts, interpolated Read, multi-pass ISF, MIDI Program Change nodes and a Trim node. All MIDI and OSC nodes are now instanceable and with more alignment tools you can easily make your patches more organized and readable.

Wire Fix List
#15657 Add 1/2 Patch Size and 1/4 Patch Size resolution options
#15658 Connect actions that cause loss of input constant values are not undone.
#15671 Store output routing selection in patch and enable output if possible on patch load
#15681 Slice Render should scale according to its resolution attribute
#15682 Getting instanced, inlets should inherit original inlet value
#15685 Dragging a .isf resource to the patch create a new ressoure even if it already exist
#15691 Saving patch with ISF the shader resets values if it has defaults in the code
#15703 Inlet/Outlet inspectortje should also show multiline text, now it's all in one line
#15752 ISF multipass implementation
#15757 Give Toggle two trigger inlets to force the state
#15786 Patch with Russian and weird characters in file name doesn't load on windows
#15793 All inlets of Switch want to disconnect trying to instancing network with a trigger
#15798 Screen Shake should rotate around center
#15809 Add Max attribute on Linear node (to make loopable lists)
#15882 Crash consolidating patch with missing resource
#15891 Double clicking .cwired with Resolume not running, and choosing cancel in the installation prompt makes Resolume freeze on startup
#15898 Crash loading patch which has syphon output enabled, after a patch which had syphon output enabled
#15976 Read OSC loses 'Address'-input when changing type
#16004 Converge: Node that goes from event instances to single stream
#16005 Crash connecting float to 1st inlet of greater after texture to 2nd inlet

Download
Select "Check for Updates.." in the Avenue or Arena menu and it will self-update, including Wire. Or checkout the downloads page. Comment »
« Older