Here's what you get when you throw Avenue, Quartz Composer, IRMapio, two 10K projectors, a dance company and a whole lot of talent in to a blender:

Creative talent behind all this is Mika Ventura, and he kindly explained more of the details to satisfy your geeky needs:

Geneva dance company Diadé hired us to create a backdrop video for their new show "Metro". The whole backdrop had to look like a metro train, so we built a 9m by 3m screen to project upon. The elements had to be independently triggered : opening of doors, tilting of the metro axis, outside view (through the windows), charting speed, insertion of other elements as vehicles or fake billboards, etc.

The need to use Resolume became obvious really fast, as 80% of the content was created with Quartz Composer, like the 3D metro train or the backdrops charting on different layers. The Resolume interface, with its layer levels and its possibility to directly control Quartz Composer elements offered us the flexibility we needed. More over, we had to use two 10.000 lumens projectors connected to a Mac via a Matrox Triplehead2Go. Using IRmapio, we were able to create a soft edge in no time.

Resolume's structure was set up as such :

Here are a few pictures : 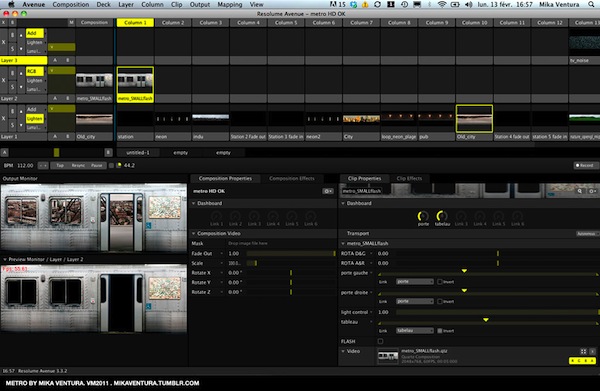 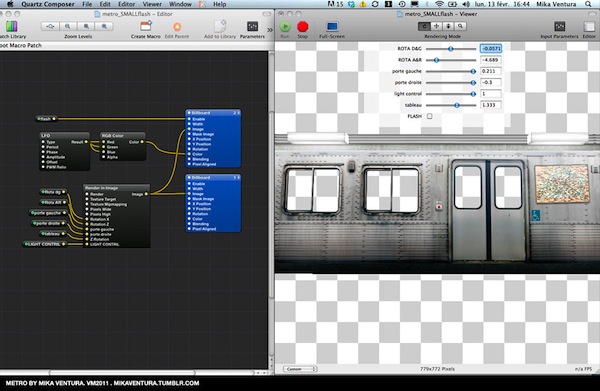 
For more of Mika's amazing work, check out his blog at http://mikaventura.tumblr.com/ There's some cool stuff to be seen there! Comment »

This footage release introduces two new artists on the label, which is always an exciting thing. Fresh blood with fresh styles is good for the gene pool.

AkustoOptik is a VJ team from Berlin, a town buzzing with creativity. In fact they show just how much Berlin is buzzing with their new set MiniBerlini.

Unit 44 blasts itself on the label with the grungy GFX. Originally developed as a video clip to satisfy their craving for brutal 3D work, they now let their baby loose to wreak havoc on the world.

And not new but still fresh we got our very own Hybrid Visuals, offering slick and stylized motion work in hypnotic patterns. As always, the Quartz Composer for even more Repetitive Strain on your eyes.

WaveFunction Quartz Composer VJ Loops by HybridVisuals
We're always saying generative content is the future, so it's about time we proved it! The original Quartz Composer patch is included to create endless variations yourself.


LightTrails VJ Loops by Video2000
Flowing and sparkling, these luminous ribbons weave their way through 3D space. Also available in ultra widescreen 2400x600 resolution! The ultra widescreen version has a resolution of 2400x600 (3 x 800x600) so it's perfect for use with the Matrox Dual or Tripple-head.


PapeRate VJ Loops by Video2000
Treading the thin line between texture and refraction, grunged and polished, rough and smooth, PapeRate is a colourful trip.