Effects are super awesome! Everything playing in Resolume can be manipulated by effects. All of the audio and all of the video.

When you get right down to it, each effect is a small program that changes the audio or visual in some way, controlled by parameters. You send this little program whatever is currently playing, it does its magic based on how you have it set up, and then it spits out the result back to Resolume. 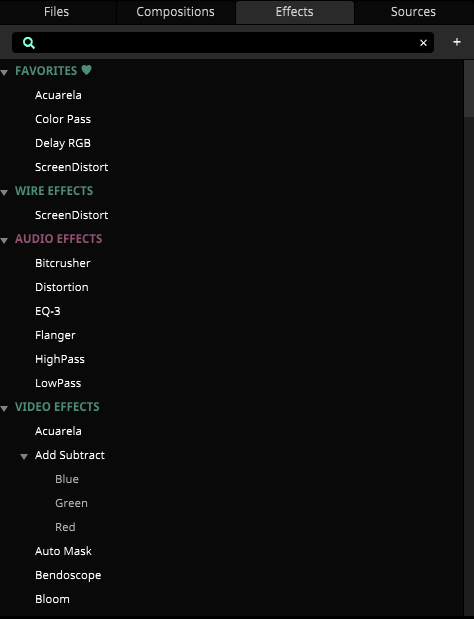 Resolume comes with a whole bunch of video effects built-in, more than a 100! It also has a handful of basic audio effects. If that doesn't cut it for you, you can read more about adding even more effects below.

You can find all of the effects in the Effects tab, which in turn can be found in the bottom right of the interface.

To preview an effect, double click its name in the browser. It will show in the Preview Output, applied over whatever is playing in the composition. You can then tweak its parameters, to see if you can get the look you’re after.

If you've found the right effect for the right moment, just drag the effect from the Effects tab onto the area of either the Composition, Layer of Clip tabs. Drop it right where it says 'Drop effect or mask here'. You can also directly drop it onto a clip or layer. 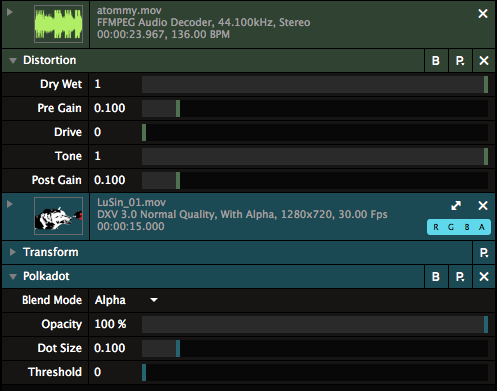 Tip! Hold down ALT while dropping an effect to apply it with its opacity turned all the way down. This way you can tweak its parameters, and then bring it into the mix gradually.

Clip effects are applied to the individual clip when it is playing.

Layer effects are applied to whatever clip is playing in the layer, after its clip effects have been applied.

Composition effects are applied to the final output, after the layers have been mixed together.

All effects can be temporarily bypassed (B toggle) or removed (X button).

If you're an Resolume effect ninja and already know the name of the effect you’re looking for, you can type its name into the Search box at the top of the effects browser.

Tip! Hit CTRL-/  (or CMD-/ on a Mac) to focus the box without having to reach for your mouse.

Why the '/' key, you ask? Because it's just like hitting CTRL-?, just without the SHIFT key.

Depending on the effect, audio effects can have any number of parameters. But there is one that they all share. The "Dry/Wet" slider controls how much the affected version for the audio is mixed with the original.

When this parameter is moved over all the way to the right, you hear the full result of the effect and none of the original audio. When its moved to the left, the effect will not be heard at all.

Similarly to audio effects, video effects always have at least two parameters: Opacity and Blend Mode. You use these to mix the effect with the original video. As with mixing layers, different combinations of blends and opacity levels can have very different results.

To make sure you see only the result effect and nothing but the effect, select the Alpha blend and turn the opacity all the way up.

Aside from this, this manual is too short to tell you what every parameter of every effect does or how you should use it. You can try them out and wiggle a few of the controls to find out yourself. You'll figure out which ones you like soon enough. Some of our personal favourites are: Vignette, Hue Rotate, Stingy Sphere, PolkaDot, Goo and Particle System.

Masks are essentially effects that create transparency in the image. Using a still image file, Resolume will render certain parts of your content invisible, based on the pixels in the still image.

You can create a mask by dragging the Mask effect onto a panel and using the Load... button to load an image file. You can also drag a still image straight on a panel directly.

Once loaded, you can decide how to create transparency via the Channel dropdown.

By changing the Channel to Red, Blue or Green, Resolume will use the pixel's R, G or B values instead of the overall Luminance.

When set to Alpha, Resolume will use the mask image's Alpha channel to decide transparency.

Of course, you can also Invert the mask.

When the image used for the mask has a different resolution than the content, Resolume will stretch it to fit.

Would you like to use moving content for your mask? Take a look at the Layer Mask Mode.

Transforms are your primary tool for composing a beautiful image. Quite often a little scaling on the right content does so much more for your output than overbearing effects like Kaleidoscope.

Transforms are so important, they got their own little page in the manual. 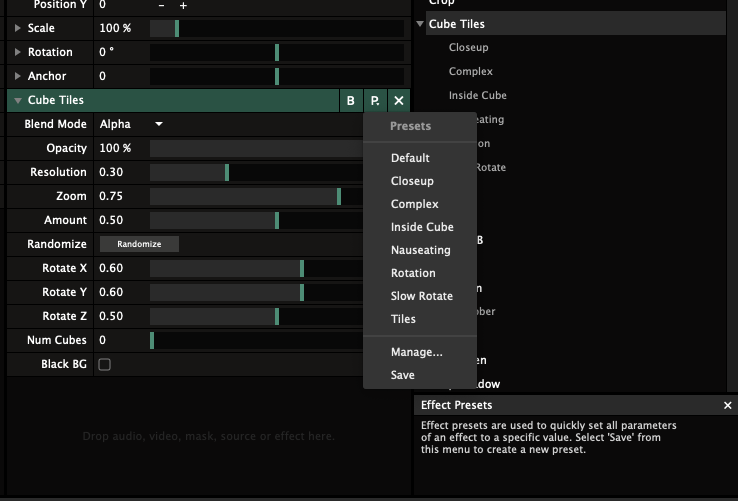 All effects support the creation of presets. Each preset contains all the settings for an effect - enabling you to quickly activate an effect, set to just the right sweet spot.

To create a preset, first get the effect working how you want it. Work the controls until the output is juuuuust right. Then use the Preset drop down above the effect parameters and select the Save option. The Manage Presets window opens, you can enter a name and hit return to save.

When you apply a preset, the octopus uses all its tentacles to quickly set all the parameters to the right settings in one go. After that it swims away again. The effect doesn't remember which preset was used to get its current settings. It doesn't even care if the octopus did it, or you did it yourself by setting everything by hand. So, when you update a preset, other effects that were set to this preset by their octopus don't get updated with it. The octopus just visits once, and then disappears in a big inky cloud.

Doesn't make sense yet? Well, I tried. Just remember presets are a way to quickly set an effect's parameters to specific values. Not a way to keep all your effects on the same settings.

With so many effects you are sure to have some favorites. You can favorite your effects to place them under the favorites tab of easy acces. Simply click the heart icon to favorite an effect and you are ready for the races. 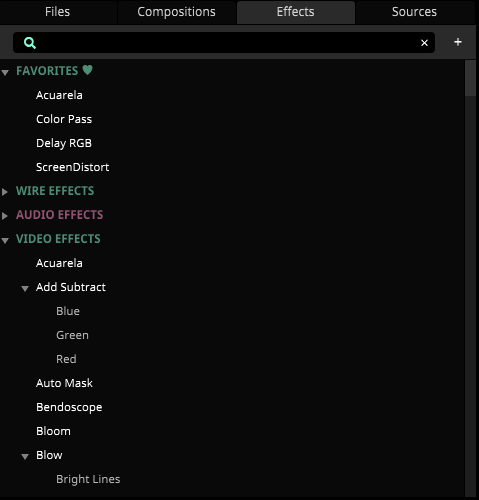 You can also animate the effect bypass switch. When you right-click on the B icon you get a menu with all the regular parameter animation options. This way you can easily turn an effect on and off to the beat for instance.

Thus far, we've only talked about applying a single effect. But you can apply as many effect as you want. You can keep going until everything is one big nasty pool of ugly pixels. Or until smoke comes out of your computer. Whichever comes first really.

Effects can be stacked together by dropping more than one into the same place. If you do this, they will be applied in order, starting with the top one in the slot. Each effect will be applied in turn, affecting the output of the previous effect.

You can change the order of the effects by dragging them up and down by their name.

Changing the effect order can dramatically change the resulting output. For example, you could apply the PolkaDot effect on a clip, followed by Radar. Looks cool, right?

Now see the difference when you drag Radar above PolkaDot.

The difference is subtle, but extremely important! 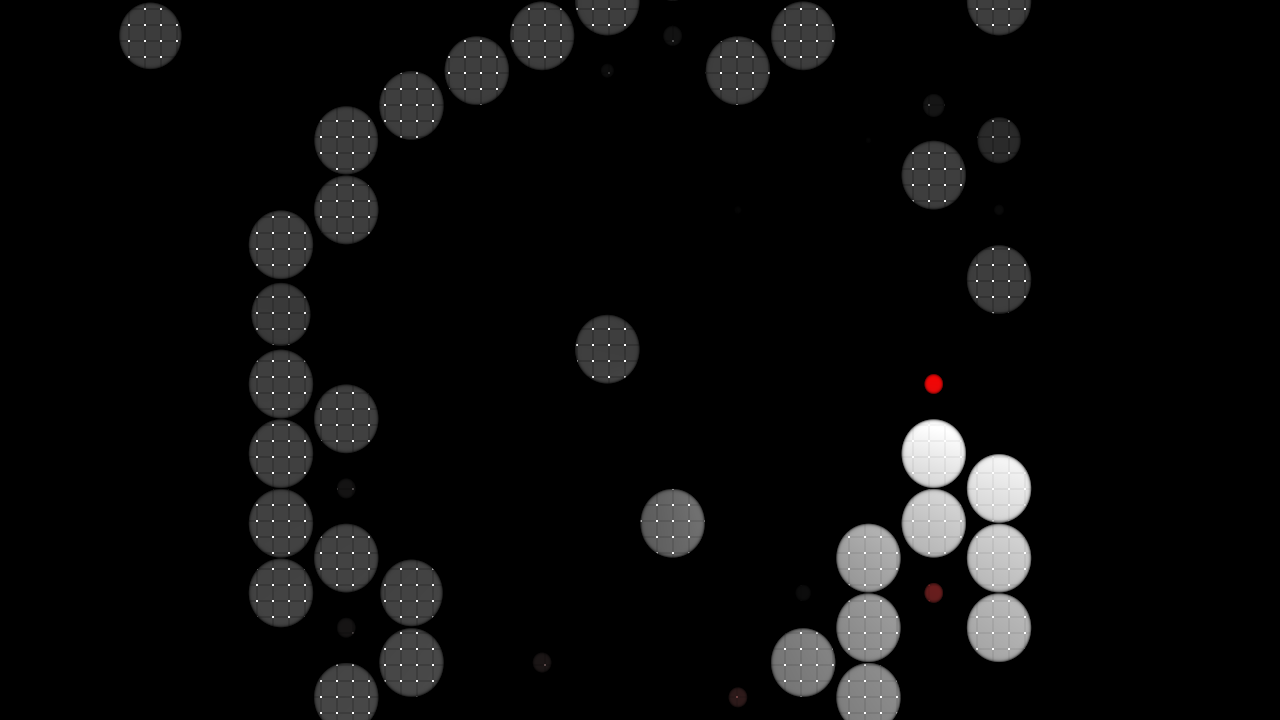 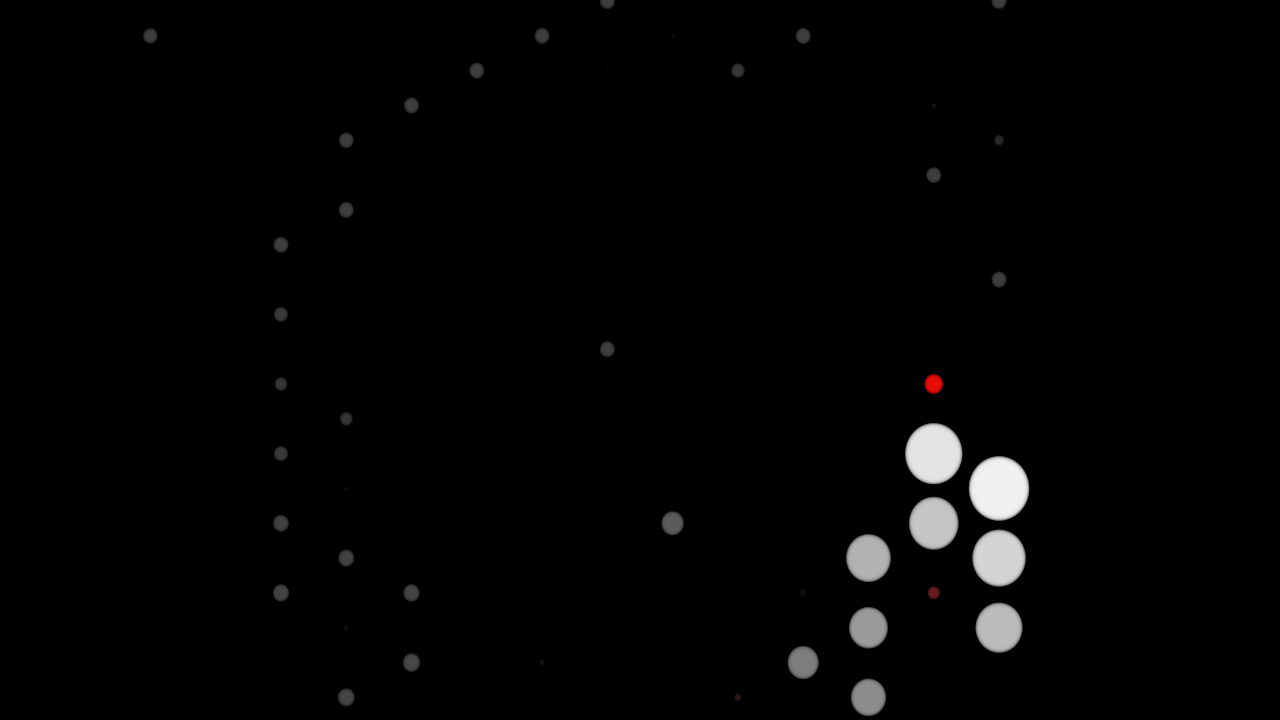 Tip! Transform is an effect just like all the others. So you can stick transforms anywhere in the render stack.

Bonus Tip! Because Transform is an effect like all the others, you can also save your own Presets for it.

Sometimes you'll load the same effect multiple times but use it for different purposes. For this case you can rename an effect instance to your liking by right-clicking the name of the effect and then selecting Rename.

Effects can also be added to an empty clip. When you do this, you will create an Effect Clip. If you're used to working with Photoshop or After Effects, you'll know this feature as Adjustment Layers.

Any effects applied on an Effect Clip will be applied to all the clips playing in the layers underneath it. This way you can very quickly create a sequence of different looks and effects, while still being able to swap out the footage on the fly.

Even better, this will allow you to assign MIDI or keyboard triggers to effects, or even fade from one effect to the other using the layer transitions.

Like Sources, Effect Clips can be assigned a duration as well, so you can use them with the Auto Pilot too.

The Juice Bar is a great place to start your journey into external plugins.
We have a thread on our forum where links to plugins are shared among VJ's. Note that for Resolume 6 and up, the plugin needs to be compiled for 64 bit.

To load a 3rd party plugin, simply copy the .dll (PC) or .bundle (Mac) file to the 'Extra effects' subfolder in Resolume's user folder in Documents. Restart Resolume, and your plugin will be loaded automatically. If you like, you can also add your own custom folder to scan during startup.

For VSTs, you can similary add your own folder to scan for VSTs.