You compile your patch before you release it into the wild or even sell it online. When you compile the patch, all your resources and patch data are stored into one file that is either editable or non-editable. When a compiled patch is used in Avenue or Arena the Wire watermark will never show up. So a user does not not have to own a Wire license just to use compiled patches made by someone who does have a Wire license.

Before you compile, you have to give your patch a name. Make it count. Next you need to select where the compiled patch will be stored.

By default the editable toggle will be off. This means that the person who opens your patch won’t be able to edit it or access the resources in it. The extension of the file will be .cwired. It can be opened in Resolume and Wire. 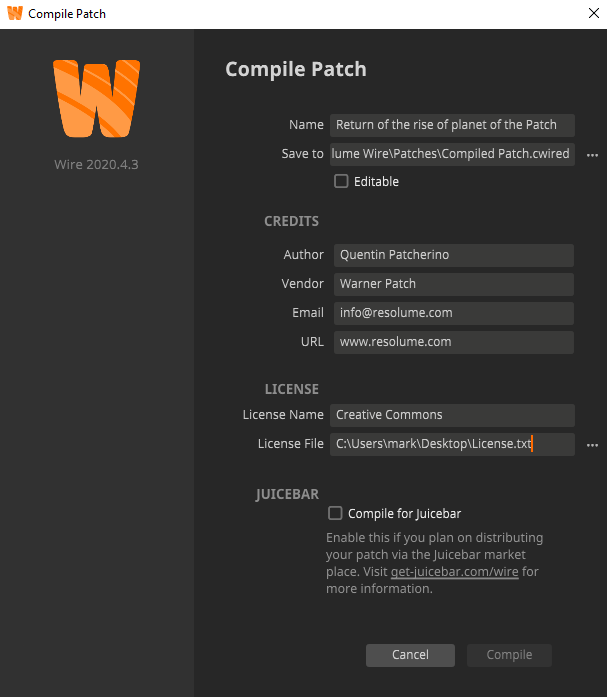 If you toggle editable on the user will be able to edit and modify your patch and access the resources in it. The file extensions will be .wired. It can be opened in Resolume and Wire. 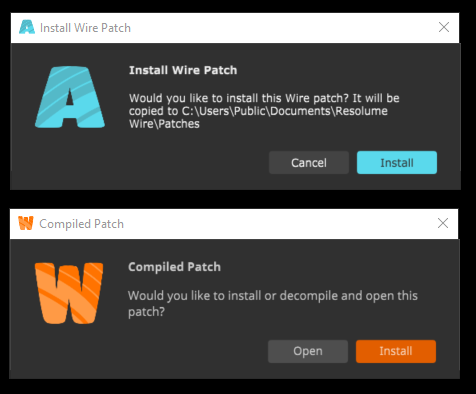 Under license you describe the type of license used that applies to the patch. This could be Creative Commons, AGPL or even proprietary. Make sure to include the license agreement as a .txt file.

A common way to sell your patches is through the Juicebar. When you do this, make sure to toggle Compile for Juicebar on. For more information on publishing your patches on Juicebar see here.

If you want to up your nerd game you should be compiling your patches using the command line. It does all of the above but in a way Sandra Bullock Angela Bennett would approve of.

Options
-o, --output <filename>
Set the output filename that the compiled patch is written to. Defaults to the filename of the patch with the extension updated to that of a compiled patch.

-j, --juicebar
Compile the patch so it requires a license generated by the juicebar to render without a watermark.