Using NDI, you can send video from a Mac to a PC and vice versa, over the Network.

You can even use your smartphone to send from it's camera to the network, with Newtek's NDI camera app.

There's no hard coded limit to how many connections you can set up. Of course your network bandwidth will get full at one point. Typically a 60 FPS 1080p NDI stream will require at least 150 megabits /seconds bandwidth. 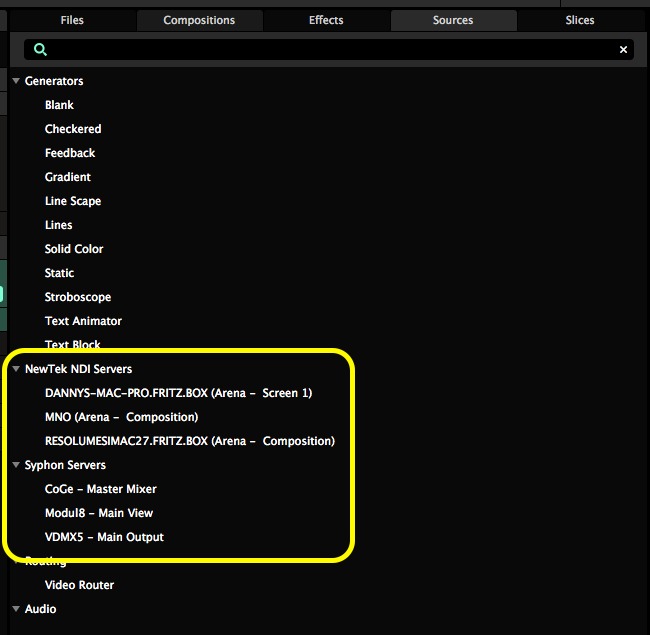 Any program that is sending its output will show up under the sources tab. You can add them to a deck, like you would any other live input.

You can use as many inputs at the same time as you want, as long as your network can handle the data. 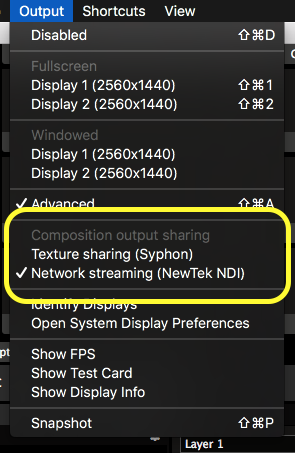 The moment NDI is enabled via the Output Menu, Resolume will immediately start broadcasting its main output as well.

Other NDI enabled applications running on this computer or on the same network will now pick up Resolume's composition output.

When sending NDI from the Composition, the output will have the composition's dimensions. 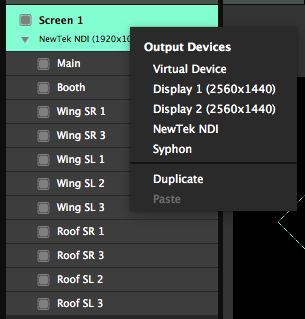 Resolume Arena allows you to further control this via the Advanced Output.
NDI outputs can also be treated like a separate physical screen.

This allows you to warp the output before sending it, or to select parts of your composition to send. While you can still send a different output to your physical screens.

When sending to NDI from the Advanced output, you can change the width and the height of the output as desired.

Do you have an NDI camera that has Pan - Tilt - Zoom? You can also control these directly from Resolume. 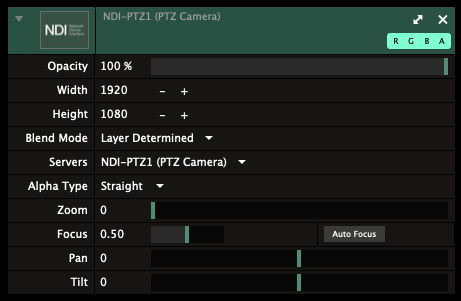 The NDI protocol doesn't currently have a way to select which network interface it uses to send data. As a consequence, it will use your Wifi when you have both wireless and wired connections active. Especially on OSX, it will always default to Wifi when it's available.

As you can imagine, sending video over Wifi is pretty crap. So you'll want to disable your wireless connection when setting up NDI.

Sometimes an NDI source is available from the Sources tab, but shows a red Offline mark when used as a clip. It will also show up as 0x0 in size.

When this happens, in 99% of the cases you have an IP mismatch. Although both computers are physically connected to the same network and able to 'see' each other, they're not set to the same IP range, so the pixels can not be delivered.

NDI is a professional video over IP protocol. To use it, you need to know how to manage your IPs correctly. If that sounds really hard, it's because it is. IT is a real job and a completely different ballpark from video, so maybe it's smart to get help from someone that has experience setting up networks.

These are some features in NDI we'd love to also support in Resolume, but need to find the time for them: