This article is here to teach you about the data types in Wire. If you have no experience with coding or programming you have come to the right place.  This won’t be hard. As a matter or fact, the first datatype we’ll explain is as easy as flicking a light switch.

Are you gonna be my Bool, true or false?

The Boolean(Bool for friends) can only be in either one of these two states. True or False. 1 or 0. On or Off. Like a light switch.

In Wire booleans can be used to turn certain features of a node on or off. Like the bypass on an effect. Booleans can also be used in conjunction with a Switch or a Gate node to literally make a light switch operation. Maybe use it to switch between two shapes?

When a boolean is converted into a float or integer it will be either 1(true) or 0(false). Now you can do math with booleans. Or simply have a toggle to add 1 to a certain value.

Booleans can be converted to triggers using the If node.

Integers are like whole numbers, but they can be either positive or negative.

Integers are useful in conjunction with switches and gates to open a certain gate or switch. As well as when working with arrays to address a specific instance in the array.

Integers are converted to floats when they go into an inlet that expects Floats.

Down here, they all float

Float is short for floating point number, which is just a really fancy way of saying the number has a decimal point in it. It can be either negative or positive. Floats are used very frequently in Wire as many values will range between -1 and 1.

There are four types of floats in Wire: Float, Float2, Float3 and Float4.

These are all floats, the number simply indicates how many separate floats are in the data type.

Float 4 nodes can be converted to materials using the Material node.

If you want to combine a number of floats, integers and/or booleans into a Float2, Float3 or Float for you can use the Pack node. To do the reverse we’ve made the Unpack node for you! How convenient!

Triggers are one shot events that trigger certain actions in nodes. In the example below you can see the Transport Beat node sending out a trigger each 1/4 beat. This triggers the Attack Release node to blow up the radius of the circle.

Triggers can not be converted into numbers. They are great for BPM-synced effects, reset buttons and one-shot features.

Triggers can be converted to booleans by using the Toggle node.

Pretty stuff in the making

Internally Shape2D is a whole range of coordinates that tell your GPU how to draw it. Because Of this we can do all kinds of cool modulation to it without destroying its integrity. You can blow up a circle 10 times in size and still it will not pixelate like an image or video (Texture2D) would.

When creating generative content, you want to stay in the Shape2D as long as possible to maintain flexibility. Once converted to Texture2D you are working with pixels and working destructively.

Note that video effects will accept Shape2D as an input. But they will convert your shape to Texture2D in the process.

Shape2D nodes can be converted to Texture 2D by using the Shape Render. Multiple instances of a shape can be merged together into one channel by using the Merge node. 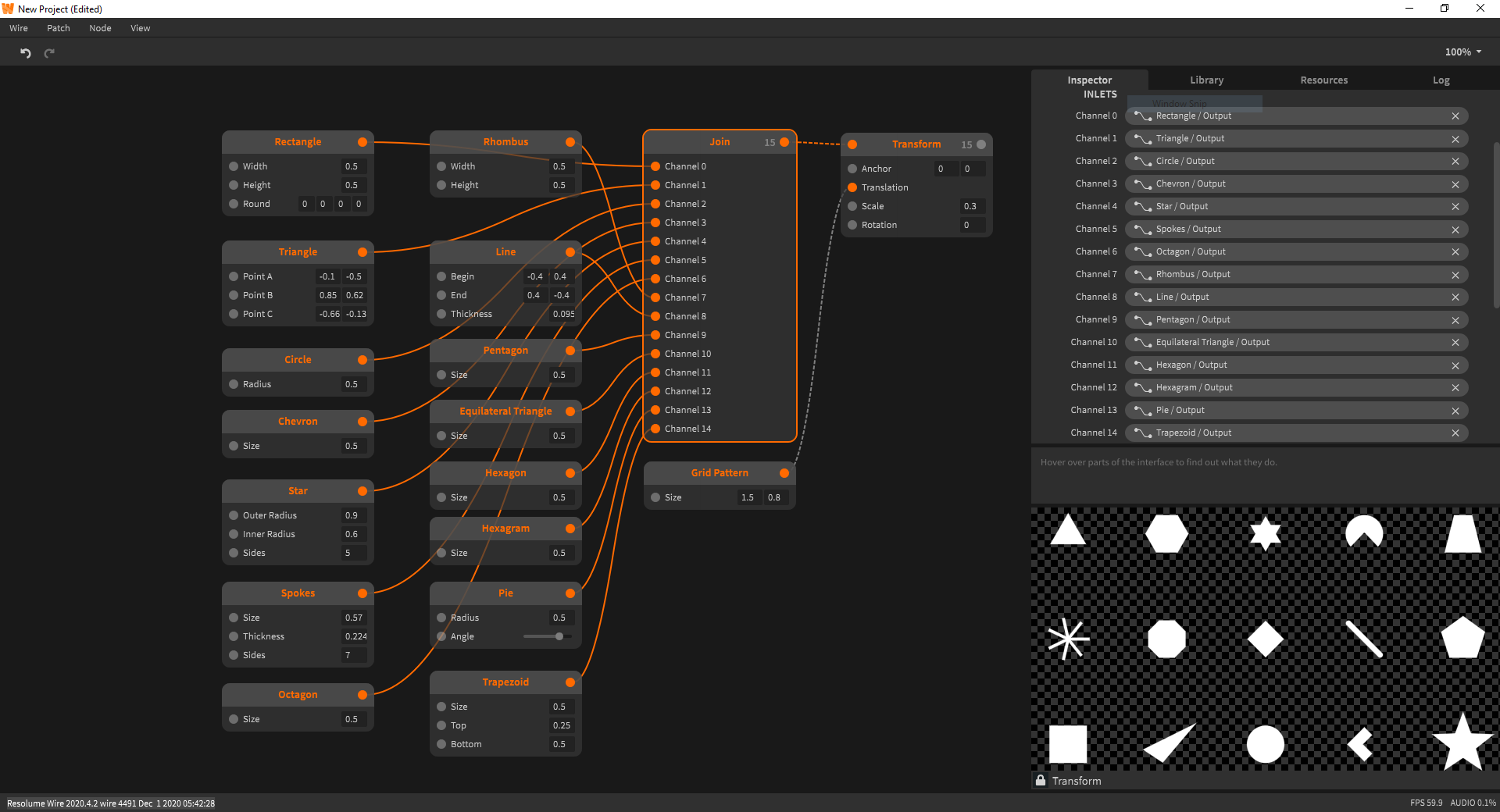 All the pretty stuff

Texture2D are all your images, clips, shaders and converted shapes.

It’s not a thong!

Strings are a datatype that contains text. You can use strings with the Print node to send them to the Log. In the future you will be able to send Strings to a text generator that will convert your strings to textures.

The language of control

OSC is another communication standard. It is slightly more complex than MIDI, but is more flexible. Wire can both read and write OSC for you. To learn more about OSC check out our article on OSC (https://resolume.com/support/en/osc)

A little piece of you

Wire has multiple ways to manipulate Slices you create in Resolume’s Advanced Output. Wire can convert your slices into shapes and textures.