Transport is a collection of data like BPM, the current bar and beat and time signature.

This is data that Wire can generate itself. When you create a transport node the transport bar will appear at the top of your canvas. Here you can start, stop and pause your transport.

Resolume has the same transport data so the transport-based patches you make will work in Resolume. Working with transport is a great way to create visuals and effects that interact with the beat.

There is a small family of nodes that interact with the Transport. Now we’ll examine each one.

This node outputs the BPM, beat count, numerator and denominator as values. You could use the BPM in combination with the Map node to make sure a value always scales according to the BPM.

Use this node to send triggers out when the play, pause or stop buttons are pressed. 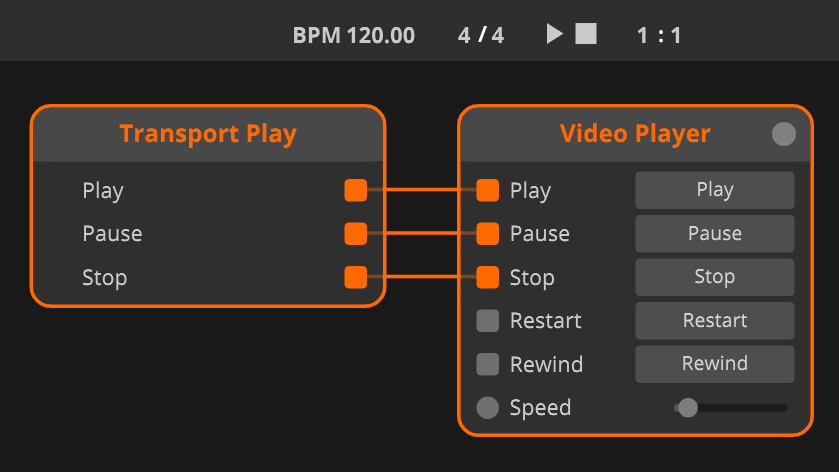 Using the transport play node to start/stop/pause a clip.

The transport beat is the real OG of the Transport node. This node sends out triggers on the beat. Multiple time divisions can be extracted from this node. So maybe some strobes on the 8th notes and explosions on the 4th?

For all you weirdos out there rocking out to 1/12th beats and VJ-ing waltzes, we’ve hidden those time signatures. You can reveal them by right clicking the node and toggle them on under the visibility tab.

If the 1/12th beats aren't avant garde enough for you, then there is Transport Tick. This node puts out a trigger each beat, depending on its multiplier. At 0.5 you will get a 2th beat. At 1 you get a 4th beat etc. Now go ahead and insert a division of Pi you crazy bastard, you know you want it!

Now that you have your triggers coming from your transport nodes we need something to do with them.

You can convert the trigger to booleans using the toggle node and use this to turn bypass effects or open/close switches and gates. The Random and Bag nodes really like triggers. The Timeline + Curve combination is golden. There is enough here for everybody!